GAZIANTEP, Turkey (Reuters) - At least 51 people were killed when a suicide bomber aged between 12 and 14 attacked a wedding party in the Turkish city of Gaziantep late on Saturday, the president said.

The attack was the deadliest in a series of bombings in Turkey this year, and President Tayyip Erdogan said ISIS (Islamic State in Iraq and Syria) was likely behind it.

"Initial evidence suggests it was a Daesh attack," Erdogan said in Istanbul on Sunday, using an Arabic name for the murderous Sunni group. He said 69 people were in hospital and 17 were "heavily injured".

A destroyed suicide vest was found at the blast site, officials said.

ISIS has been blamed for other similar attacks in Turkey, often targeting Kurdish gatherings in an effort to inflame ethnic tensions. The deadliest was last October, when suicide bombers killed more than 100 people at a rally of pro-Kurdish and labour activists in Ankara.

Saturday's attack comes with Turkey still in shock just a month after Erdogan and the government survived an attempted coup by rogue military officers, which Ankara blames on US-based Islamist preacher Fethullah Gulen. Gulen has denied the charge. 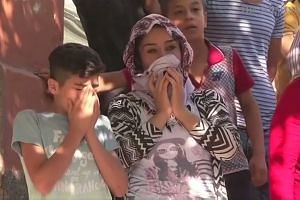 The pro-Kurdish Peoples' Democratic Party (HDP) said the wedding party was for one of its members. The groom was among those injured, but the bride was not hurt.

The bomb went off as guests spilled out into the streets of the city close to the Syrian border after the traditional henna night party, when guests have their hands and feet painted.

Women and children, including a three-month-old baby, were among the dead, witnesses said.

Blood and burn marks stained the walls of the narrow lane where the blast hit. Women in white and checkered scarves wept outside the morgue waiting for word on missing relatives.

"The celebrations were coming to an end and there was a big explosion among people dancing," said 25-year-old Veli Can."There was blood and body parts everywhere."

"We want to end these massacres," witness Ibrahim Ozdemir said. "We are in pain, especially the women and children."

Hundreds gathered for funerals on Sunday, with coffins draped in the green of Islam. But some ceremonies would have to wait because many victims were blown to pieces and DNA tests would be needed to identify them, security sources said.

Anti-government protests erupted at at least one funeral, where threw plastic bottles and chanted "Murderer Erdogan!"

Some in Turkey feel the government has not done enough to protect its citizens from ISIS.

NATO member Turkey is a partner in the Western coalition against ISIS, allowing US jets to fly missions against the group from its air bases. It has also supported some rebel groups in Syria.

Syrian rebels backed by Turkey were preparing to launch an operation to capture a town held by Islamic State near the Turkish border, a senior Syrian rebel said on Sunday.

Islamic State is also fighting US-backed Syrian Kurdish rebels, who have taken ground from the hardline group. Ankara considers the Syrian Kurdish fighters a terrorist group and worries their advance against ISIS will encourage Kurdish militants in Turkey.

"ISIS has been trying to agitate or exploit already tense ethnic and sectarian faultlines to retaliate for the advancement of Syrian Kurds in the north of Syria and by Turkey's attack on ISIS targets in Syria," said Metin Gurcan, an independent security analyst and retired Turkish military officer who writes a column for Al-Monitor. "For ISIS it is hitting two birds with one stone."

Violence also flared again this week in the largely Kurdish southeast. Ten people were killed in bomb attacks, mostly police and soldiers, in an escalation that officials blamed on PKK Kurdish militants.

Turkey began air strikes against Islamic State in July 2015. A peace process with the PKK collapsed and it also began targeting PKK targets in northern Iraq.

Just a half an hour away from Gaziantep is the border town of Kilis which has been repeatedly hit by rockets and shells fired from Islamic State territory, sometimes killing civilians.

On Sunday, Erdogan and ruling AK Party lawmakers emphasised they see ISIS as no different to the Kurdish separatist PKK and the group led by Gulen, all three classified by Turkey as terrorist organisations.