LONDON (NYTIMES) - As Prime Minister Theresa May of Britain continued her effort on Monday (Nov 26) to sell her agreement to withdraw from the European Union to sceptics in Parliament, she was blindsided by President Donald Trump, who called the agreement "a great deal for the EU", and warned that, if it were adopted, it might obstruct a free trade deal between the United States and Britain.

Mrs May has long held out the prospects of a new trade deal between the US and Britain as one of the payoffs of leaving the bloc, and negotiations were expected to begin as early as next spring, after Britain's March 29 exit, known as Brexit.

According to Mrs May's proposed withdrawal agreement, a bilateral trade deal could come into force at the end of a transition period in 2020.

But Mr Trump's comments suggested that Britain might never be able to conclude a bilateral trade deal with the US, creating new difficulties for Mrs May. She must overcome the resistance of around 90 lawmakers within her own party if she is to win parliamentary approval for the agreement next month.

And a group of hardline, pro-Brexit lawmakers, who have begun a campaign to replace Mrs May as the Tory leader, may find themselves strengthened by US support.

Speaking to reporters outside the White House, Mr Trump offered a withering assessment of the deal, which was approved on Sunday by the European Union's 27 member states.

"I think we have to take a look seriously at whether or not the UK is allowed to trade, because you know right now if you look at the deal, they may not be able to trade with us and that wouldn't be a good thing," he said.

"I don't think that the prime minister meant that and hopefully she'll be able to do something about that," he said. "But right now, as the deal stands, she may not - they may not be able to trade with the US and I don't think they want that at all, that would be a very big negative for the deal."

In response to Mr Trump's comments, a Downing Street spokesman said that under the proposed withdrawal agreement, it "is very clear we will have an independent trade policy so that the UK can sign trade deals with countries around the world - including with the US".

The spokesman added that the government has "already been laying the groundwork for an ambitious agreement with the US through our joint working groups, which have met five times so far".

This was not the first time Mr Trump has publicly undermined the British Prime Minister. He used a July visit to Britain to criticise her planned approach as too incremental, since the British economy would continue to be subject to many European regulations.

While on the visit, in a startling breach of diplomatic practice, Mr Trump also endorsed Mrs May's top rival in the Conservative Party, Mr Boris Johnson, who had just resigned as foreign minister in protest over the withdrawal deal. 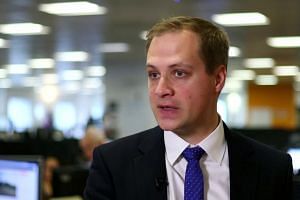 Mr Trump has regularly derided the European Union as an unfair trading partner to the United States.

His comments on Monday were likely in reaction to headlines over the weekend announcing the approach of a new deal between Britain and the trading bloc, said Mr Ian Bremmer, president of the Eurasia Group. He added that Mr Trump rarely gets involved in the details of trade agreements.

"I don't think there's any linkage with trade negotiations," Mr Bremmer said. "His knee-jerk reaction is that the EU is getting a better deal. He hates the EU, the EU is always trying to take advantage, the UK is getting screwed."

Last month, US Trade Representative Robert Lighthizer told the Senate that Mr Trump "intends to initiate negotiations on a trade agreement with the United Kingdom" swiftly, "as soon as it is ready after it exits from the European Union on March 29, 2019".

Britain is the United States' seventh largest trading partner, with a total of US$232 billion (S$319 billion) in goods and services flowing between the two countries every year. The United States is Britain's single biggest export market, followed by seven countries in the European Union.

Under the proposed deal, Britain will continue to trade with the United States under existing bloc regulations until December 2020, when the transition period ends.