BRUSSELS (WASHINGTON POST, REUTERS) - The European Union's top trade official said on Friday (March 9) that the 28-nation bloc will seek to be excluded from United States President Donald Trump's steel and aluminum tariffs, a day after he signed off on them with the caveat that countries with a "security relationship" could seek an exemption.

EU Trade Commissioner Cecilia Malmström said that Europe shared American concerns about China's support for its steel industry, but she said that the tariffs of 25 per cent on steel and 10 per cent on aluminum were the wrong way to address the issue.

"We share the concern of overcapacity in the steel sector," Ms Malmström told a conference in Brussels. "This is not the right way to deal with it."

She said that EU officials were still trying to understand Mr Trump's Thursday announcement, in which he slammed countries around the world for unfair trade practices but left open the door to trade partners to seek exemptions. Canada, which is the top source for US steel imports, and Mexico are both excluded from the tariffs.

Ms Malmström will on Saturday in Brussels hold a meeting with US Trade Representative Robert E. Lighthizer and Japanese Trade Minister Hiroshige Seko that was originally scheduled to discuss cooperation about Chinese trade issues but has now transformed into something more adversarial.

French Finance Minister Bruno Le Maire, who is due to meet representatives of the industry on Monday in Brussels, said on Friday Europe must respond to the new tariffs with a united voice if its eventual countermeasures are to have an impact.

US should exclude EU from tariffs to defuse trade dispute, says Angela Merkel 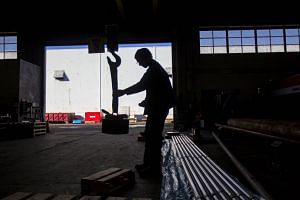 EU policymakers have readied about US$3.5 billion (S$4.6 billion) in countermeasures that will strike against symbolically important areas in the US - bourbon, motorcycles and blue jeans - which are manufactured in the home districts of congressional leaders. They also plan to file a complaint with the World Trade Organisation.

Mr Trump has cited national security concerns as the legal basis for the tariffs. European policymakers have dismissed that as nonsensical, since most US steel imports come from its military allies.

"We are friends, we are allies, we work together. We cannot possibly be a threat to national security in the US," Ms Malmstrom said.

"We count on being excluded," she said, adding that the policy announced by Mr Trump was "not crystal clear".