ANKARA (AFP) - Three years ago, Ms Elif was a teacher at a high school in southeast Turkey. Today, she still works in an education centre, but she is only allowed to cook and clean.

Ms Elif, whose name has been changed upon request, is one of 33,000 teachers sacked over suspected links to an Islamic network accused of trying to overthrow the government on July 15, 2016.

"While other teachers teach, I make food and clean toilets," said Ms Elif. "I am 37 and I am starting my life from scratch again."

She is far from alone: from the former academic who now works as a construction worker, to the ex-head of an NGO who now runs a cafe, and from an ex-judge who sells tea to a former police officer who works as a caretaker - there are many examples in a country where 150,000 public sector workers have lost their jobs since the attempted putsch.

The government says it is necessary to purge followers of US-based preacher Fethullah Gulen from the highest echelons of the military and judiciary down to every part of public service.

Mr Gulen, who has lived in the United States for 20 years and was once seen as an ally of President Recep Tayyip Erdogan, strongly denies the government's claim that he ordered the putsch in 2016.

Described by the government as a "terrorist organisation", the slightest whiff of association with Mr Gulen has destroyed lives.

Ms Elif describes herself as a leftist Muslim and admits to being a sympathiser of the movement, but says she has never been an active part of the network. 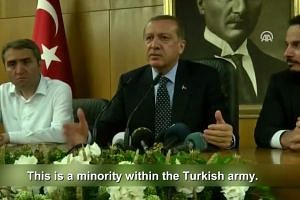 She was even acquitted in court last summer of being a member, but that was not enough to save her career.

Many highly-educated Turks like her in the public sector have been stigmatised and frozen out of their professions simply over suspicions of Gulenist ties.

Mr Ahmet, a former chemistry academic who also wished to use a pseudonym, says he has applied for 1,200 jobs and only been granted around 30 or 40 interviews, of which none was successful.

He has been forced to grow fruit and vegetables and sell them on a street corner to survive.

The 44-year-old and his wife are among 6,000 academics sacked by decree during the two-year state of emergency which followed the attempted coup.

"It was a shock," he told AFP. "When I explain my situation to employers, they don't want to hire me. Maybe if I did not say anything, I could work in the black market," he added, but he refuses to do so since he believes he has nothing to hide.

"People know we have done nothing wrong, but everyone is extremely scared," Ms Elif said. "Look, even I don't want you to publish my name because I am scared."

After small jobs here and there, Ms Elif was employed by the tuition centre thanks to a friend, a change of status which she said was obviously difficult.

Her husband, who is also a teacher, was sacked and then detained for eight months. Ms Elif herself spent 10 months on conditional release, accused of belonging to a union with ties to the Gulen movement.

When her husband was released, he "was in utter turmoil" and became violent. They separated soon after, and are now divorcing.

Ms Elif now finds herself alone and needing to take care of three children on a salary of 1,000 Turkish lira (S$238), much less than the 4,500 lira she earned as a teacher. It is an amount which only covers her rent.

Many of those sacked are heavily reliant on the support of their loved ones.

Ms Elif, whose parents are dead, was able to look to her older sister and her sister-in-law for help as well as some friends.

She was forced to suffer painful rejections, including from her uncle who asked her not to call him anymore. Her husband's parents, who are civil servants, also refused to help, fearing they could lose their jobs as a consequence.

It was the same for Mr Ahmet, who could only count on the help of his parents and his in-laws. "For 20 years I had the same telephone number but friends blocked me, I cannot contact them anymore," he said, adding his neighbours look away when he passes them.

Ms Elif is waiting for a commission set up by the government to fully clear her name and hopes to obtain her passport again after it was confiscated.

Mr Ahmet expects little from it. But he hopes he will be acquitted of being a member of the Gulen movement so he can have his passport back and leave Turkey with his wife and two children.