PARIS (AFP) - A third body was found in a badly-damaged apartment block where the suspected ringleader of the Paris attacks was killed in a ferocious shootout with police, prosecutors said Friday.

It is already known that the alleged planner, Belgian national Abdelhamid Abaaoud, was killed and prosecutors confirmed on Friday that a woman reported to be his cousin, 26-year-old Hasna Aitboulahcen, died in Wednesday's assault.

Aitboulahcen had been thought to have blown herself up after prosecutors said on the day of the raid that a woman died when she detonated an explosives vest. 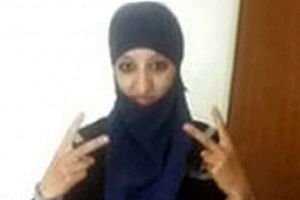 But a police source told AFP on Friday that the suicide bomber was in fact suspected to have been a second man.

Investigators were still examining body parts to confirm the gender of the third suspect.

The apartment block in the northern Paris district of Saint-Denis, near the Stade de France national stadium, was severely damaged as elite Raid police rained 5,000 rounds of ammunition on it and lobbed in grenades after a tipoff that Abaaoud was there.

Prosecutors say the target was "a new team of terrorists" which was preparing to launch another attack following the carnage in Paris on Nov 13 when 130 people were killed.

One of the suspected attackers, Salah Abdeslam, 26, is still on the run. His brother, Brahim Abdeslam, blew himself up at a bar on Boulevard Voltaire during Friday's attacks, but did not kill anyone.

Seven attackers are known to have died in Friday's attacks, which have been claimed by the Islamic State in Iraq and Syria (ISIS) group.

Investigators revealed on Friday that Abaaoud was caught on camera at a Paris Metro station in Montreuil, to the east of the capital, on the night of the attacks.

He was spotted at around 10pm, when the bloody siege of the Bataclan concert hall was going on.

It is believed he might have been one of the men in a car from which gunmen opened fire on restaurants, killing dozens.

The attacks on the capital were launched by three suicide bombers outside the Stade de France where France were playing Germany in an international football match.

In the trendy eastern district around Canal St Martin and Voltaire, another unit sprayed gunfire at people enjoying a Friday night out in bars and restaurants.

Then, in the worst of the violence, three gunmen stormed into the Bataclan, where American group Eagles of Death Metal were playing.

At least 89 people were killed before French police raided the building when two of the attackers detonated their suicide vests and the third was shot dead.

It was the deadliest terror attack in Europe since the 2004 Madrid train bombings in which 191 died.