What began as the usual lively Saturday night out on London Bridge and in the historic quarter of Borough Market turned into a tragic outing for hundreds of Londoners and tourists, as three men went on a rampage, first in their van and then later armed with knives. Eyewitnesses describe the horror as it unfolded at various places.

Mr Vilwar Hussein told the BBC news channel that he had seen a white van perform a U-turn on London Bridge before driving back southwards along the pavement.

A man called Mark told the BBC he was taking photographs on London Bridge when he saw the van swerving wildly.

He said: "It was swerving from side to side and I could see it hitting people, and there was a group about 20 or 30 yards (18m or 27m) in front of me. The van hit those people. At that moment, I was doing that calculation of trying to work out which direction I should run."

BBC reporter Holly Jones, who was on the bridge at the time, estimated that the van was probably travelling at 80kmh.

"He swerved right round me and then hit about five or six people. He hit about two people in front of me and then three behind," Ms Jones told the BBC.

Another eyewitness told the BBC Radio 5 Live programme that he saw a van knock a person about 6m into the air. Five or six people lay strewn on the ground, and they "looked either dead or dying", he said.

A 25-year-old man told The Guardian that he was driving across the bridge when he saw a man and a pregnant woman unconscious on the road. "We thought it was a car accident but as we got closer, we could see a lot of blood and bodies. We had to get out of the car and there were lots of people screaming." After mowing down pedestrians, the van headed towards Borough Market, a centuries-old food market bustling with restaurants and bars.

She was going, 'Help me, help me', and I couldn't do nothing. I want to know if this girl is still alive. I've been walking around for an hour and a half crying my eyes out. I don't know what to do.

MR GERARD VOWLS, 47, on seeing a woman being stabbed 10 or 15 times by three men. He had been watching the Champions League final at the Ship pub in Borough when the attack happened.

A man, who gave his name only as Robbie, was in a taxi opposite the Barrowboy and Banker pub on London Bridge.

"I saw about 20 or 30 people rushing to get back into the pub and, five seconds later, a big white van came screeching down the pavement," he told BBC Radio 5 live.

Three men got out of the van and some bystanders thought the men were going to help the accident victims, but they were sorely mistaken.

Instead, the men "started kicking them, punching them and took out knives. It was a rampage, really", a bystander known only as Eric told the BBC, adding that he, too, heard a shout of "this is for Allah".

Robbie knew something was amiss when he saw the men's faces. "I could tell immediately, they looked very aggressive."

Mr Gerard Vowls, 47, was watching the Champions League final at the Ship pub in Borough. He told The Guardian that he was at the start of the south side of London Bridge and saw a woman being stabbed by three men 10 or 15 times.

"She was going, 'Help me, help me', and I couldn't do nothing," he said. "I want to know if this girl is still alive. I've been walking around for an hour and a half crying my eyes out. I don't know what to do."

Mr Vowls said he threw chairs, glasses and bottles at the attackers to try to stop them. "They kept coming to try to stab me... they were stabbing everyone. Evil, evil people."

The attackers were not done and continued stabbing people as they made their way towards bustling Stoney Street, a few hundred metres away. Diners and drinkers were none the wiser that danger was approaching, until waves of people began streaming into the restaurants and pubs, some of them screaming.

"The bouncers did a really good job, they shut the doors and locked everyone in," eyewitness Will Orton, who was also in a pub close to the scene, told the BBC. "There was panic - it seemed like it was literally outside the door."

Mr Owen Evans, 39, was with friends in The Wheatsheaf pub in Stoney Street when shooting broke out. "I was in the back of the pub. A wave of about 30 people ran in and tried to get into the cellar or cupboard. Then there were shots outside. They didn't seem real - like a kid letting off firecrackers," he told The Guardian.

By this time, police were already on the scene, entering some premises and shouting at patrons to get down.

"We saw police lights and everyone got down under a table. People turned tables over... We waited about 10 minutes or so, with several shots every couple of minutes," recalled Mr Evans.

"The bar staff were amazing, I think they locked the door so no one got in... Then they told us to leave the pub and to run, and a policeman standing outside with a gun was shouting at us to get out."

British media reported people fleeing the scene with their hands held up, under the watchful eyes of the police.

Mr Steven Gibbs, who was drinking in St Christopher's Inn, a few metres from the scene, told the BBC: "A black cab drove past and the driver shouted, 'Terrorist attack, run!' I stood up to take a look and then all of a sudden, there were gunshots. Lots of people were screaming."

He was taken into the basement of the bar before the police came in and told everyone inside to run. "I've never been so scared in my life," he said.

By 10.16pm, the three men had been shot dead by the police, two of them close to The Wheatsheaf pub. 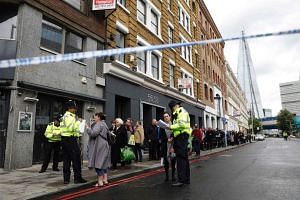 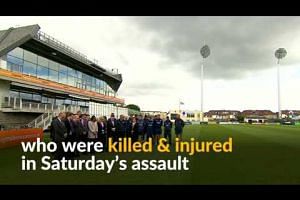 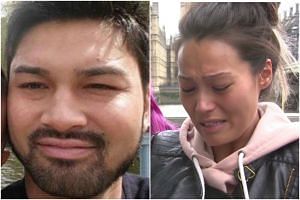 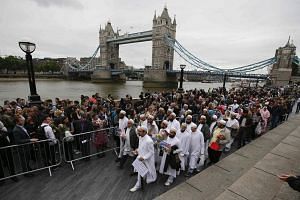 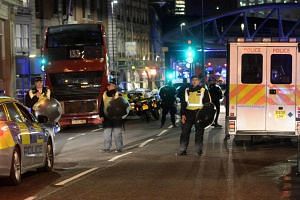 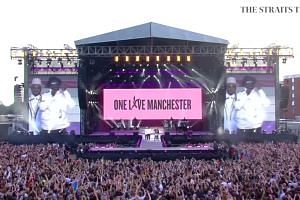 London terror attack: How it unfolded

A version of this article appeared in the print edition of The Straits Times on June 05, 2017, with the headline ''They were stabbing everyone''. Subscribe
Topics:
More
Whatsapp Linkedin FB Messenger Telegram Reddit WeChat Pinterest Print Purchase Article Copy permalink