LONDON (BLOOMBERG) - Having finally decided to take control of the Brexit process, at least for a day, British members of Parliament are setting out how they think things should move forward. They will vote on them from 7pm London time on Wednesday (March 27), using paper ballots.

MPs will be able to vote for every option that they support, with the object of finding a solution that could get a majority. The result isn't binding on the government - but Parliament could try to make it so in subsequent moves.

There are two types of motions, those that focus on outcomes - what sort of relationship Britain should have with the European Union - and those that deal with process - the means of getting to that outcome.

These are the proposals we know about so far. The full list will be published on Wednesday morning. Then it will be up to Speaker of the House of Commons John Bercow to decide which are voted on.

The official Labour proposal is to back the Withdrawal Agreement that Prime Minister Theresa May has negotiated, in return for her seeking a customs union with the EU, a close alignment with the single market, and a close relationship to other institutions.

A simpler motion, from Labour's Gareth Snell, simply instructs the government to seek a customs union with the EU.

A process motion says Parliament shouldn't ratify or implement any withdrawal agreement until it has been approved in a referendum. This is put forth in the name of Labour's Margaret Beckett. 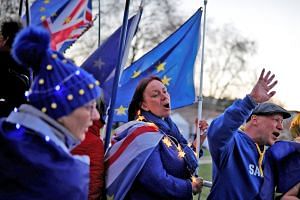 Theresa May could offer resignation date to get Brexit deal through

Tory MP George Eustice has proposed that Britain should stay in the European Economic Area and rejoin the European Free Trade Association. This would give it access to the EU single market. This is the relationship Norway has.

Also being described by its authors as "Common Market 2.0", this proposal would add a "comprehensive customs arrangement" to the Norway option. It is backed by Labour's Stephen Kinnock and Lucy Powell, and Tories Nick Boles and Robert Halfon.

A process amendment, this would require a confirmatory vote in Parliament if Britain gets to within two days of a no-deal Brexit. It is proposed by the Scottish National Party's Joanna Cherry.

The idea that briefly looked like it might save Mrs May's deal is back. It is Mrs May's deal, without the Irish backstop section that Tory MPs hate but the EU insists on. Mrs May has asked MPs not to vote for things the EU will refuse, but she has previously voted for this, so it is not clear if that would be included.

A process motion from the Scottish National Party that says Britain should not leave the EU without the agreement of the Scottish Parliament and the Welsh Assembly.

Not an Option: May's Deal

Mrs May's office said it won't be putting the deal she has negotiated into the mix. It could be that it fears its prospects would be damaged if it proved less popular than other options.