LONDON (REUTERS) - British Prime Minister Theresa May admitted on Monday (March 25) she did not have enough support to pass her EU withdrawal deal as some in her party called on her to quit and parliament plotted to wrest the Brexit process away from her government.

At one of the most important junctures for the country in at least a generation, British politics was at fever pitch and, nearly three years after the 2016 EU membership referendum, it was still unclear how, when or if Brexit will take place.

With May weakened, ministers lined up to insist she was still in charge and to deny any part in, or knowledge of, a weekend plot to demand that she name a date to leave office.

Amid the chaos, it was unclear if or when May would bring the divorce deal she agreed with the European Union back to parliament. The deal was defeated by 149 votes on March 12 and by 230 votes on Jan 15.

"It is with great regret that I have had to conclude that as things stand there is still not sufficient support in the House (of Commons) to bring back the deal for a third meaningful vote," May told members of parliament (MPs).

With speculation swirling around her future, parliament prepared to try to seize control of the Brexit process from the government in a series of votes due from 10 p.m. (2200 GMT).

One proposal, put forward by Oliver Letwin, a lawmaker in May's Conservative Party, seeks to change the rules of parliament on Wednesday so that lawmakers can express support for different Brexit options, such as remaining in the EU single market or in a customs union, in so-called indicative votes.

May said such a move would set an unwelcome precedent and the government would oppose it. However, a government source said a majority of MPs were likely to back Letwin's plan. 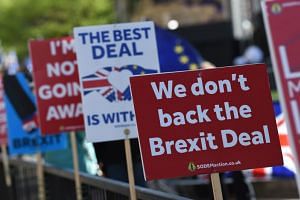 UK PM May will only hold new Brexit vote if there's a chance of success: Spokesman

Last week, the EU agreed to delay Britain's original March 29 departure date because of the deadlock. Now, it will leave the EU on May 22 if May's deal is approved by parliament this week. If not, it will have until April 12 to outline its plans.

May refused to give up on her deal passing this week, noting that the alternatives were unpalatable to her and that there was no evidence of a majority in parliament for anything except the principle of avoiding an abrupt "no-deal" exit.

"Unless this House agrees to it, 'no deal' will not happen.'No Brexit' must not happen," May said.

She said another referendum, a new agreement, or not leaving the EU at all were among the alternatives that had no majority.

The bottom line remained that if her deal and no deal were rejected, Britain would have to seek a longer delay to Brexit.

The EU believes a 'no-deal' Brexit is increasingly likely.

"We don't want a 'no-deal' Brexit, we'd much rather have the Withdrawal Agreement, but if it is to be a 'no deal', let's do it quickly," an EU official said. Sterling fell as the chances of May's deal passing slipped.

Opposition Labour leader Jeremy Corbyn said May's approach to Brexit had become "a national embarrassment" that risked allowing Britain to crash out of the EU without a deal.

Earlier, May's divided cabinet of senior ministers met to discuss a way forward with some reports saying ministers had"war-gamed" a parliamentary election. Some Conservative MPs openly said she should quit.

To get her deal passed, May must win over at least 75 MPs who voted against her on March 12 - dozens of rebels in her Conservative Party, some opposition Labour Party MPs and the Northern Irish Democratic Unionist Party (DUP), which props up her minority government but has voted against the deal so far.

"Why would the prime minister ever expect us to give support to an agreement which is based on a lie?" DUP Brexit spokesman Sammy Wilson told BBC television.