A Swedish teenager used a lunch at the World Economic Forum in Davos to tell world leaders, business figures and celebrities that rather than finding a solution to global warming, some of them were profiting from inaction on climate change.

"Some people say that the climate crisis is something that we all have created. But that is not true because if everyone is guilty, then no one is to blame. And someone is to blame," 16-year-old climate crusader Greta Thunberg told the audience that included musicians Bono and Will.i.am, anthropologist Jane Goodall, UN Framework Convention on Climate Change executive secretary Christiana Figueres and Japanese insurer Sompo Holdings president Kengo Sakurada.

"Some people, some companies and some decision-makers in particular have known exactly what priceless values they have been sacrificing to continue making unimaginable amounts of money. And I think many of you here today belong to that group of people," Ms Thunberg said to applause.

She told news agency DPA yesterday that she wanted the prospect of global warming to instil fear in world leaders and jolt them into action. "I want you to feel the fear I feel every day, and then I want you to act," she said. "I want you to act as if the house was on fire, because it is."

Her address on Thursday drew elements from a speech she delivered after arriving in Davos by train and publicised by Greenpeace. In that speech, she had rejected the notion that "we are not doing enough to fight climate change".

"Because to 'not do enough', you have to do something. And the truth is we are basically not doing anything," she said.

She pointed at the outsized efforts by some to fight climate change, but noted that they were too far from power to make a difference, unlike world leaders and large companies. 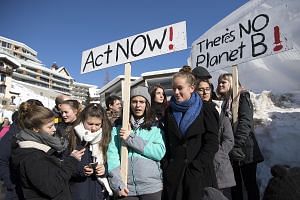 "I want to challenge those companies and those decision-makers into real and bold climate action. To set their economic goals aside and to safeguard the future living conditions for humankind," said the teen activist.

The young environmentalist has become a prominent voice pressing the global elite to take action on climate change. She first came into the spotlight when she began skipping school every Friday to protest in front of the Swedish Parliament.