STOCKHOLM • Swedish Prime Minister Stefan Lofven is on course to lose power in a confidence vote in Parliament today, with no clear indication who would replace him after an inconclusive election that saw a surge for the far right.

Voters delivered a hung Parliament in the Sept 9 election, with Social Democrat Lofven's centre-left bloc garnering 144 seats, one more than its centre-right rivals, the Alliance. The anti-immigration Sweden Democrats, with 62 seats, are expected to side with the Alliance and vote to remove Mr Lofven in today's confidence vote.

"I regret the fact that the centre-right is going ahead and demanding a vote of confidence in the Prime Minister without them having a plan on how a new prime minister will be chosen," Whip of the Social Democrats Anders Ygeman said.

Swedish politics has been deadlocked since the election, with both mainstream blocs claiming victory. They have rejected offering support to each other and ruled out cooperating with the Sweden Democrats, a party with roots in the white supremacist fringe which has been shunned by all other parties since entering the Riksdag legislature in 2010.

While today's vote is likely to spell the end of the minority coalition of the Social Democrats and Greens, the make-up of the next government remains unclear.

Parliament voted for a Speaker from the Alliance yesterday, handing the four-party coalition a slight advantage. The Speaker's main task is to pick a prime ministerial candidate who is tasked with forming a viable administration.

But the complicated maths of Parliament makes it far from certain the Moderates, Centre, Liberal and Christian Democrats that together form the Alliance can take power. 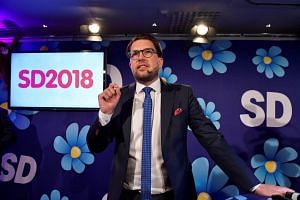 The Alliance hopes to gain the support of the Social Democrats or Greens, a proposal Mr Lofven has already rejected. Instead, he hopes to detach the Centre and Liberal parties from the Alliance and form a centrist government.

The Sweden Democrats have promised to vote down any government that does not give them influence over policy, particularly on immigration. No party has shown any willingness to compromise.

"Because everyone has ruled out cooperating with the Sweden Democrats, the traditional blocs have to cooperate with each other," Liberal party leader Jan Bjorklund said. "If some kind of cooperation does not happen, Sweden will have a fresh election."

A version of this article appeared in the print edition of The Straits Times on September 25, 2018, with the headline 'Swedish PM faces ouster with no clear govt in waiting'. Subscribe
Topics:
More
Whatsapp Linkedin FB Messenger Telegram Reddit WeChat Pinterest Print Copy permalink