TROLLHATTAN, Sweden (AFP) - Children in the Swedish town of Trollhattan witnessed scenes of horror on Thursday as a masked attacker wielded a bloodied sword in their school, cutting down students and teachers as they crouched behind desks in darkened classrooms.

Fourteen-year-old student David Issa saw the 21-year-old assailant, who was shot by police and later died in hospital, slay his teacher.

Media reports identified the attacker as Anton Lundin Pettersson, describing him as a quiet 21-year-old opposed to Islam and immigration.

“He was a loner. He played video games, lived in his own world,” a former classmate told daily Expressen.

"We were sitting in the (school's) cafe and then this guy came up who was wearing a mask and carrying a sword and he stabbed my teacher. I panicked and ran away," he told AFP, his voice shaking.

The attacker allegedly had far-right sympathies and may have targeted the Kronan school for its heavy immigrant population, Swedish media reports suggested.

The school has 400 students ranging from kindergarten to grade nine, or ages 6 to 15 for the most part.

Wearing a Darth Vader-like mask and dressed all in black, the assailant arrived at the school and posed for pictures with unsuspecting students who thought it was a prank or a Halloween costume.

But then he went on his rampage, stabbing two teachers he encountered near the entrance before roaming the halls and hunting down more victims.

"I saw a masked man wearing black clothes coming up the stairs, he was carrying a sword covered with blood," recalled Ahmed Hadi, a 25-year-old mathematics teacher at the school.

"He moved to another classroom. The kids were scared. We turned the lights off, and put desks behind the door. We asked the kids to sit down and be calm - they're only 10 years old," he said. 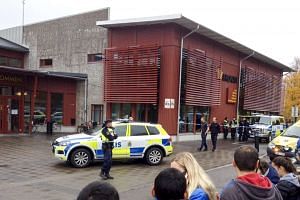 The assailant was eventually gunned down by police in the hallway outside Hadi's classroom.

Amal Ahmed, mother of seven-year-old pupil Susan, said her daughter was terrified by the horror of what she witnessed.

"My daughter... has been crying and talking the whole day about the blood she saw," she said.

"We are from Iraq. We left our country for security here in Sweden. We don't want violence, especially for our kids," she added.

Hussein Kaari said his younger 14-year-old brother was in the first classroom approached by the attacker.

"He knocked on the door. One student opened. The guy didn't say a word, he just attacked with his sword. The student said: Oh, look, he cut me! The others didn't seem to believe him, until they saw the blood flowing," he said.

In the end, one teacher and one student were killed, and another teacher and student remained in hospital with stab wounds fighting for their lives.

Police were able to piece together the killer's movements "by following the blood on the floor" that dripped from his weapon, investigator Thord Haraldsson said.

Hours after the attack, as darkness fell outside the school blocked off by police cordons, residents placed candles and flowers on the ground.

People in Trollhattan, an industrial town of 57,000 once home to Swedish carmaker Saab, were in shock that something like this could happen in their normally peaceful town.

Some stood outside the school, holding a vigil and carrying posters reading "Why?", and "Why kill?" But there were no answers for them: police remained silent on a possible motive.

The neighbourhood is located on the outskirts of Trollhattan and is emblematic of Sweden's social segregation. It has low-cost housing, a poor education record and difficulty integrating immigrants and their children.

It has a reputation to outsiders of being rife with drug trafficking and school dropouts.

Swedish Prime Minister Stefan Lofven visited the school after the attack, placing a bouquet of roses outside the front door as hundreds of locals looked on.