LONDON • A cruise ship that set out with more than 1,300 people but became stranded off Norway's coast finally reached the shore on Sunday afternoon, after rescuers launched a harrowing operation in rough weather to evacuate hundreds of people by helicopter.

More than 890 people - 436 passengers and 458 crew members - were left on the 47,800-ton Viking Sky as it headed towards Molde, a coastal town in western Norway. On Sunday afternoon, after about six hours of travelling at sea with one tugboat in front and another in the rear, the vessel finally docked.

In footage shared on Twitter, cheers and whoops could be heard from onshore.

"It has reached Molde; everything has gone according to plan," Mr Einar Knudsen, a spokesman for the Joint Rescue Coordination Centre for Southern Norway, which led the operation, said by phone.

Earlier, some passengers, who were airlifted from the ship's deck, had arrived onshore bruised and battered, the Red Cross said.

Passengers told NBC News that many had been hurt by falling objects and shattered glass as waves rocked the ship.

"Nothing similar has happened before, not in this magnitude," Mr Knudsen said.

Built in 2017, the Viking Sky is 227m long and 29m wide, according to the Viking Ocean Cruises website.

The ship, which left Bergen, Norway, on March 14, had been scheduled to arrive today in Tilbury Port on the River Thames in south-eastern England.

But when the vessel was travelling last Saturday between two Norwegian ports, Tromso and Stavanger, it sent a mayday alert that several engines had failed. 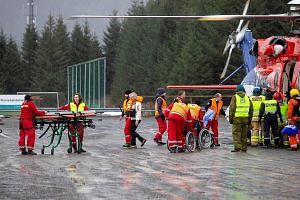 It was not immediately clear what had caused the cruise ship to lose power. But it did so along a particularly dangerous part of the Norwegian coastline called Hustadvika, said Mr Eirik Walle, a coordinator for the southern rescue centre.

Five helicopters and several other vessels were involved in the rescue effort, which was hampered by high winds and 8m-high waves.

"We understand 20 people suffered injuries as a result of this incident," a spokesman for Viking Cruises, which operates the ship, said by e-mail.

He added that all received medical care in Norway and some had been discharged.

"We all want to know how this could have happened," said the founder and chairman of Viking Cruises, Norwegian billionaire Torstein Hagen. "I'm sure there will be plenty of time to point fingers at what could and should have been done, but that's for later."