“We will not forget them,” the British singer told the crowd in French after a minute’s silence for the 130 people who lost their lives in a night of gun and bomb attacks across Paris on November 13, 2015.

“Tonight we have two tasks to achieve: first to remember those who lost their lives in the attack, and then to celebrate life and music in this historic place.”

Sting began the emotionally charged concert with his song Fragile, singing: “Nothing comes from violence and nothing will.”

Many in the crowd wept during the first song, but the singer then got the place on its feet clapping and stamping with Message In A Bottle.

Scores of survivors of the Bataclan assault attended the packed concert, the dominant event in a weekend of otherwise low-key commemorations. 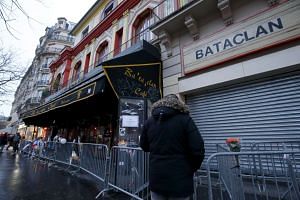 Among them was Aurelien, determined to have a good night despite the pain of returning to the scene of so much horror.

“It’s the first time I’ve been in a public space for a year. I haven’t been to the cinema, to a concert, I get my shopping delivered – I’ve always stayed at mine,” said Aurelien, who did not want to give his full name.

“Tonight I’m taking my life back like it was before. It’s a duty, there’s an obligation to be here – because there are 90 people who can’t come anymore,” he added, visibly moved, his hands trembling.

“It was very hard to be here at first, but now it’s going a bit better – I’m drinking my beer and I’m hoping to have a good time.” .

Sting also paid tribute to big names in the music world who died in the past year – “David Bowie, Prince, Lemmy from Motorhead, Glenn Fry and yesterday Leonard Cohen” as he launched into the song 50,000.

Georges Salines, who lost his 28-year-old daughter Lola at the Bataclan and was among more than 250 survivors and victims attending, said the concert was “almost a taking back of the space for music and fun from the forces of death”.

The wave of Islamic State group attacks profoundly shook France but Prime Minister Manuel Valls vowed Saturday that “Islamist terrorism” would be defeated once and for all.

“Terrorism will strike us again,” he warned.

“But we have in ourselves all the resources to resist and all the strength to beat it,” he added, as flowers and candles were left outside the Bataclan amid tight security.

On Sunday, the actual anniversary of the attacks, President Francois Hollande and Paris Mayor Anne Hidalgo will unveil plaques outside the Bataclan as well as the other locations that were targeted – the national stadium, restaurants and bars.

One year on, nine people out of the around 400 injured in the rampage are still in hospital.

France remains under a state of emergency, while terrorism and the role of Islam have emerged as key themes six months before presidential elections.

Sting’s hour-long concert sold out within minutes of going on sale Tuesday, with the singer donating the proceeds to two survivors’ charities.

While reopening the doors will mean reliving painful memories for many, Jules Frutos, who has co-run the venue for the last 12 years, told AFP: “We had to go on after such horror and not leave a mausoleum, a tomb.”

Since the attacks, the Bataclan’s owners have spent several million euros replacing its devastated interior with identical fittings, from the seats to the floorboards.

Families, psychologists and counsellors will be on hand to support survivors Saturday, organisers said.

The Bataclan has been a temple of rock music since the 1970s, drawing stars such as Lou Reed, The Clash, The Cure and Prince.

The venue will remain dark on the anniversary itself, before opening again on Wednesday for a series of concerts by British singer Pete Doherty, Senegalese star Youssou N’Dour and British 1960s star Marianne Faithfull.