TROMSO, Norway - Cheaper, faster and better. That is how Singapore plans to keep its port operations so its maritime trade continues to thrive - even if global warming causes an alternative trade route to open up in the Arctic Ocean.

"We have to make sure that our port provides the most efficient, cost-effective services to shipping companies. So even with reduced shipping activities, there will still be a sizeable number of ships calling at our port," said Minister of State for Foreign Affairs Sam Tan.

Speaking to The Straits Times earlier this week on the sidelines of a conference on Arctic issues in Tromso, Norway, Mr Tan cited Singapore's investment of billions of dollars into the new Tuas mega port as a strategy to safeguard the Republic's booming maritime industry, which accounts for 7 per cent of gross domestic product.

The Tuas project will increase Singapore's port capacity to 65 million TEUs (twenty-foot equivalent units) of cargo, more than double what the port handled in 2016. Announced by then Transport Minister Lui Tuck Yew in 2012, the mega port will consolidate all of Singapore's port operations in Tuas. It will open in four phases, with the first berths expected to be operational in 2021.

Global warming is causing sea ice in the Arctic Ocean to melt, opening up the Northern Sea Route to ships.

This is a passageway that will shave 30 per cent off travel time via the conventional Suez Canal-Malacca Strait option. While it is now open only for a few months during the northern hemisphere summer, accelerating rates of sea ice melt could make this route viable all year round.

Mr Tan said such developments may not pose immediate threats. But Singapore is taking a long-term view on developments in the Arctic - whether it be the opening up of new trade routes or rising sea levels caused by melting glaciers. 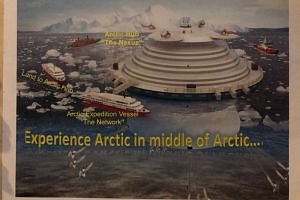 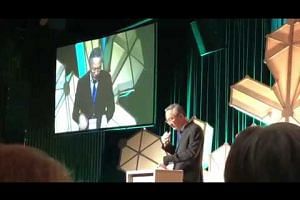 According to projections from Singapore's Second National Climate Change Study, mean sea level is estimated to rise by up to about 1m by 2100. To prepare for this, the authorities in 2011 raised the minimum reclamation level to at least 4m above mean sea level - an increase of 1m.

Said Mr Tan: "We have to prepare ourselves for these eventualities. If we don't do anything, when the new water channels open up, and sea levels rise, then we will be caught flatfooted."

While climate change and melting ice may pose many challenges for the Republic, there are opportunities to be reaped as well.

Singapore infrastructure company Keppel Corporation, for example, has since 2006 built rigs and ships for customers operating in the harsh Arctic region.

It has, for example, completed 11 ice-class specialised shipbuilding projects, including ice-breakers and storage and offloading vessels that can operate in icy conditions.

Mr Aziz Merchant, executive director of the marine and deepwater technology division of Keppel Offshore and Marine, said he also saw opportunities for Keppel to contribute its expertise in building search and rescue facilities, ice-class vessels, and tourism infrastructure, such as floating platforms that cruise ships can stop at.

As Ms Hema Nadarajah, a Singaporean doctoral candidate studying international relations at the University of British Columbia's department of political science, noted: "Despite being over 7,000km north of the equatorial tropics, the transnational nature of the changes in the Arctic would have profound consequences on Singapore's environment as well as economy... But the changes bring more opportunities than they do disruptors to the maritime industry in Singapore."