OSLO (AFP) - The captain of a Norwegian boat carrying pro-Palestinian activists - including two Singaporeans - en route to Gaza has accused Israeli authorities of violating the law by boarding the vessel in international waters and using violent force against its crew who were arrested.

Norway has asked Israel to explain the circumstances surrounding the arrests and "the allegations of excessive use of force", a Norwegian government spokesman told AFP on Thursday (Aug 2).

"We were arrested in international waters and we were closer to Egypt than Israel," the boat's captain Herman Reksten said early Thursday when he returned to Norway after being held for three days in an Israeli prison.

"Israel has broken all the rules, it's horrific that they board a Norwegian ship in international waters and force it to moor in Israel," he told Norwegian public broadcaster NRK.

The Israeli army on Sunday (July 29) announced the seizure of a boat off the Gaza Strip with activists who were denouncing the land and sea blockade imposed by the Jewish state on the Palestinian enclave for more than a decade.

The Norwegian-flagged Karstein ship had 22 people on board.

All of them have since been released and expelled from Israel or are in the process of being deported, according to Ship to Gaza Norway. 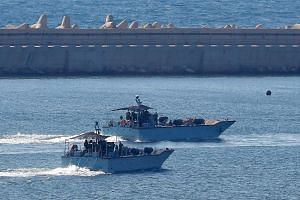 The fate of one Canadian passenger with health problems was uncertain on Thursday.

"I still have a headache from being hit in prison," he added.

The Israeli embassy in Oslo denied the accusations.

"It's actually exactly the opposite: The ones that were acting against international law were those activists who were attempting to breach an internationally-recognised legal naval blockade over the Gaza Strip, which is ruled by an Islamic terror organisation, Hamas," Mr Dan Poraz, a diplomat at the embassy, told AFP.

"There was definitely not a use of excessive violence. There was use of a minimal and reasonable amount of force simply because the crew members ... were reluctant to cooperate and to follow orders from the (Israeli) navy," he added.

Meanwhile, Norway has yet to receive an answer from Israel to shed light on the incident.

"We've asked the Israeli authorities to clarify the course of events and on what basis they think they are entitled to intervene on the ship," Norwegian foreign ministry spokesman Frode Andersen told AFP in an e-mail.

"We will also raise the allegations of excessive use of force," he added.

Israel reimposed a blockade on fuel deliveries to Gaza on Thursday citing a resurgence in kites carrying firebombs over the border.