The boy, Ramy Shehata, is a second-generation immigrant from Egypt.

Mr Salvini, who leads the anti-immigrant League party, had previously been cool about the initiative.

"Yes to citizenship to Ramy because it's almost like he was my son and he has shown to have understood the values of this country," Mr Salvini said during a TV interview quoted by Adnkronos news agency.

Last week, near Milan, Shehata was on a bus that was hijacked by its driver, an Italian of Senegalese origin, who wanted to blow it up to avenge Mediterranean migrant deaths.

Shehata and another schoolmate from an immigrant family, Moroccan Adam el Hamami, foiled the plan by calling the police using a concealed mobile phone.

The pair have since been feted as "heroes". 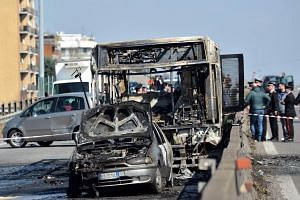 Shehata, el Hamami, three other classmates and 12 Carabinieri police officers who rescued them have been invited to meet Mr Salvini at the Interior Ministry, another spokesperson for Mr Salvini said.

On Monday, the League leader suggested there was a problem with Shehata's citizenship application because of "criminal record" issues within his family.

The Interior Ministry spokesperson refused to comment on reports that the boy's father was, years ago, accused but not convicted for burglary, breaking migration laws and falsely claiming to be a public official.

The spokesman also refused to say whether el Hamami was also in line for an Italian passport.