The dramatic police rescue of 51 children on the bus hijacked by their driver of Senegalese origin on March 20 has gripped Italy and rekindled debate about its citizenship laws.

"If there are children who are not Italian citizens, we have studied this question and we will complete the process so that they can become Italian," Salvini said after meeting five of the children and some of the police who saved them in Rome.

Salvini from the anti-immigrant Lega party stressed that the nationality would be awarded "without any variation in the law, since the law exists and works, we do not change it."

Children of foreign parents who are born in Italy can only apply for citizenship when they reach 18.

It is not known how many of the children are concerned, but 14-year-old Ramy, born in Italy to Egyptian parents, and 13-year-old Moroccan Adam played key roles by calling police during the hijacking.

The driver doused the bus in petrol and said he would set it alight, taking what he thought was everyone's mobile phone and heading for Milan airport in what he said was a protest against Salvini's tough anti-migrant policies.

As some Italians and Ramy suggested changes to the citizenship law, Salvini had earlier told the boy: "Get elected and then you can make the law."

Salvini quickly said he would try to take away the Italian nationality of the arrested bus driver, which he acquired by marrying an Italian, thanks to a tough anti-immigrant decree which became law last year. 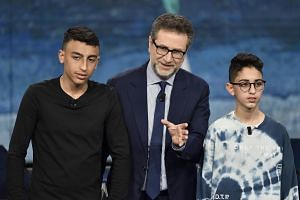 The previous centre-left government said it would change the law to make it easier to grant citizenship to foreigners born in Italy but the law was never passed.

Salvini insisted that he himself had decided to give the children nationality, after his coalition partner from the Five Star Movement Luigi Di Maio said he had changed Salvini's mind.

Salvini slammed what he called "the political manipulation of these children" before saying that Ramy was "like my son" and that he had "shown he has understood the values of this country".

He also paid homage to a 13-year-old Italian boy who offered himself as a hostage while his friends were "in panic, crying and praying".

"He is a young Italian so I can't even give him double-Italian nationality," Salvini said.

According to the most recent data, Italy naturalised 146,000 foreigners in 2017, more than any other European Union country, including 54,000 minors who became adults.

Nationality is a sensitive issue in Italy which is undergoing a birthrate crisis.