MOSCOW (AFP) - Seven candidates are lined up to run against Russian President Vladimir Putin in Sunday's (March 18) election, but his primary political opponent will not be on the ballot.

Facing competitors such as a former reality TV star and a director of a fruit farm, Mr Putin is all but guaranteed to win the vote and extend his Kremlin stint to 2024 with a fourth term in office.

Here's a look at his opponents.

ALEXEI NAVALNY: ELEPHANT IN THE ROOM

Russia's electoral commission rejected his candidacy application because of a criminal conviction which Mr Navalny says is politically motivated.

The 41-year-old is widely regarded as Mr Putin's principal opponent and has a loyal support base.

Mr Navalny has called for the vote to be boycotted in protest against his ban.

Director of a former state fruit farm which he turned into a profitable business, Mr Grudinin is Mr Putin's most popular competitor. Polls show 7 per cent of Russians are ready to put him in the Kremlin.

He has been vilified in the pro-Kremlin press for his alleged wealth and foreign bank accounts. He has also denounced "constant pressure" from the authorities. 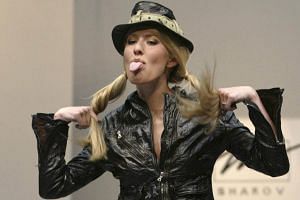 Ms Sobchak surprised Russians in October by declaring herself a candidate in the vote with the slogans "against them all", and "none of the above".

The 36-year-old has made no secret of her close ties to Mr Putin, who worked with her father Anatoly Sobchak when he was mayor of Saint Petersburg in the 1990s.

This has led many to suggest that her campaign is a bid to give the polls a veneer of competition and split the opposition vote. Ms Sobchak insists her bid is genuine. She is predicted in polls to win 2 per cent.

Mr Zhirinovsky is a Russian presidential election regular. The vote on Sunday will be the 71-year-old's sixth presidential race.

The leader of the ultra-conservative LDPR party is known for his fiery anti-American, anti-liberal and anti-communist speeches.

He is considered by many observers to be the Kremlin's token opponent and is often described as a clown in Russian political circles.

Around 5 per cent of Russians are forecast to vote for him.

The veteran liberal politician is running for the Russian presidency for the third time.

He refused to run in the 2004 election, accusing Mr Putin of rigging the vote. He was ejected from the 2012 presidential race at the last minute - a move he said was politically motivated after he came out in support of anti-Putin protesters.

The 65-year-old, who founded his Yabloko party in 1993, opposed the annexation of Crimea and has been critical of Moscow's role in Syria.

He remains a prominent critic of Mr Putin and Russia's ruling United Russia party but is tolerated by the Kremlin. Parts of the divided Russian liberal opposition view him with scepticism. Polls predict his result as 1 per cent.

A representative of the Russian business community, Mr Titov announced his candidacy in the election without any illusion about the result.

Speaking in Crimea on a campaign trip in February, Mr Titov admitted that "nobody has any doubt who will win the election" and said the main aim of the vote is to "convince the authorities, and Putin, to reform the economy".

The 57-year-old supports the Kremlin's foreign policy but has called for normalising relations with the West to stabilise the Russian economy.

Mr Titov's family owns the Russian winery Abrau-Durso, which has existed in the southern Krasnodar region since the 19th century.

His Party of Growth won less than 2 per cent in the 2016 election and polls predict he will win less than 1 per cent.

The 59-year-old leader of the nationalist People's Union party, Mr Baburin is largely unknown to the public and rarely mentioned in the media.

A former vice-speaker of parliament's lower house, the State Duma, Mr Baburin says he has been fighting against the "neoliberalism" of the Russian authorities for more than 20 years. Polls predict he will win 1 per cent.

Many Russians have also never heard of Mr Suraikin, who is predicted by polls to win less than 1 per cent.

The 39-year-old is a former member of the Russian Communist party who broke away in 2012 and founded the Communists of Russia party.

The Russian Communist Party views the Communists of Russia as a spoiler party and even took it to court for supposedly stealing its symbols.

Mr Suraikin's programme says "it is necessary for Russia to have a Stalinist communist president".