MOSCOW (AFP) - Russia has offered to send an Alsatian puppy to France in a gesture of solidarity after a police dog was killed during a raid on extremists linked to the Paris attacks.

Mr Kolokoltsev said that as "a sign of solidarity with the people and police of France", he was offering the puppy, which "will be able to occupy the place in service of the police dog Diesel killed during a special operation to neutralise terrorists".

The dog is named after a hero of Russian folk legend, Dobrynya Nikitch, famed for his strength, goodness and courage, he added.

The ministry posted pictures of the small fluffy puppy and a video of him playing with a ball, which can be viewed here: https://mvd.ru/news/item/6802710 .

The puppy was also shown on state television on Saturday. 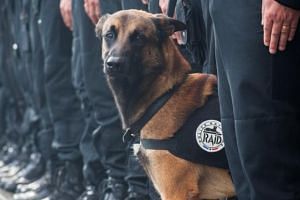 Dobrynya is two months old and lives at a police dog centre in the Moscow region, Channel One television reported. He will have to undergo medical checks and quarantine before going to France.

Two dog-handlers from Moscow police's special forces also posed with their dogs and signs with the hashtag "Je Suis Diesel" on the service's Instagram account.

The hashtag #JeSuisChien (I am a dog) trended on Twitter after French police announced that seven-year-old Diesel died in the raid targeting Abdelhamid Abaaoud, the suspected ringleader of the Nov 13 attacks in Paris that killed 130 people.

Three people died during the massive operation at the apartment in Saint-Denis north of Paris - Abaaoud, his cousin Hasna Aitboulahcen, and a suicide bomber who has yet to be identified.

Seven people arrested during the raid were freed on Saturday.