MOSCOW (REUTERS) - The Russian government was in touch with members of President-elect Donald Trump's political team during the US election campaign and knows most of his entourage, one of Russia's most senior diplomats told the Interfax news agency on Thursday (Nov 10).

Accused by defeated Democratic contender Hillary Clinton of being a puppet of President Vladimir Putin after praising the Russian leader, Trump has dismissed suggestions he had anything to do with the Russian government during the campaign.

But in comments that could prove politically awkward for the president-elect, Russian Deputy Foreign Minister Sergei Ryabkov said there had indeed been some communications. 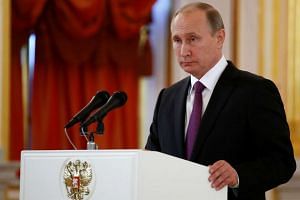 US elections: Putin says Russia ready to fully restore ties with US

"There were contacts," Interfax cited Ryabkov as saying. "We are doing this and have been doing this during the election campaign."

Such contacts would continue, he added, saying the Russian government knew and had been in touch with many of Trump's closest allies. He did not name names.

"Obviously, we know most of the people from his (Trump's)entourage. Those people have always been in the limelight in the United States and have occupied high-ranking positions," he said. "I cannot say that all of them, but quite a few have been staying in touch with Russian representatives."

Moscow was just beginning to consider how to go about setting up more formal channels to communicate with the future Trump administration, said Ryabkov.

A spokeswoman for Trump did not immediately respond to a request for comment.

The Federal Bureau of Investigation opened a preliminary inquiry in recent months into allegations that Trump or his associates might have had questionable dealings with Russian people or businesses, but found no evidence to warrant opening a full investigation, according to sources familiar with the matter. The agency has not publicly discussed the probe.

The US government has blamed Russia for cyber attacks on Democratic Party organisations.

Trump, who has spoken of his desire to improve tattered US-Russia ties, has said he might meet Putin before his inauguration, but Putin's spokesman has said there are currently no plans for such a meeting.

Interfax reported on Wednesday that Dmitry Peskov, Putin's spokesman, would be in New York this week for a chess tournament, a few blocks from Trump Tower, where the president-elect has his office.

But it cited Peskov as saying he did not plan to pass any message to Trump from Putin.

The Russian parliament erupted in applause on Wednesday when it heard that Trump had been elected and Putin told foreign ambassadors he was ready to fully restore ties with Washington.

Ryabkov was more circumspect though, saying the Russian Foreign Ministry felt no euphoria about the Republican's win despite wanting to normalise relations with Washington.

Moscow and Washington are at odds over Syria, Ukraine and Nato.

Ryabkov said Trump's allies had made some tough statements about Russia during the campaign and that his ministry was therefore not harbouring any "rose-tinted" hopes.

"We are not expecting anything in particular from the new US administration," Interfax cited Ryabkov as saying.