WASHINGTON (AFP) - The Romanian Prime Minister promised on Sunday (March 24) in Washington that her country would move its embassy in Israel from Tel Aviv to Jerusalem, breaking with both the European position and apparently with her own country's president.

Prime Minister Viorica Dancila made the announcement before the annual conference of the American Israel Public Affairs Committee (Aipac), an influential pro-Israel lobby.

Her stance would align Romania with the United States position under President Donald Trump, and it came on a day when Israeli Prime Minister Benjamin Netanyahu was beginning a Washington visit to include an Aipac appearance and a meeting with Mr Trump.

Mr Netanyahu subsequently tweeted his congratulations to Ms Dancila for informing Aipac "that she would act to complete the procedures needed to open the Romanian embassy in Jerusalem".

Nonetheless, it marked an awkward break with the position of the European Union at a time when Bucharest holds the EU's rotating chairmanship.

Adding to the uncertainty, Romania's centrist President Klaus Iohannis has opposed the move as a breach of international law. He has said that in any case, such a shift would require presidential approval.

Ms Dancila nonetheless told applauding Aipac members that "I, as prime minister of Romania, and the government that I run, will move our embassy to Jerusalem".

Mr Netanyahu, who had called on his Romanian counterpart in January to announce the transfer, welcomed her move on Sunday.

"I congratulate my friend, the prime minister of Romania, Viorica Dancila, on her announcement at Aipac that she would act to complete the procedures needed to open the Romanian embassy in Jerusalem," the Israeli leader tweeted. 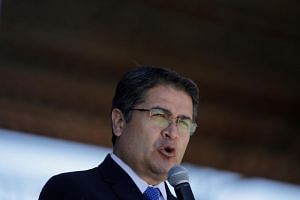 Honduran president calls Jerusalem the Israeli capital, but not moving embassy yet

Brazil moving its embassy in Israel to Jerusalem matter of 'when, not if': Israel’s prime minister

But the announcement drew criticism from senior Palestinian official Saeb Erekat, who called it "a blatant violation of Palestinian rights, international law, and UN resolutions".

Mr Erekat said the move "only contributes to eliminating the two-state solution".

He called on the EU to take action over the decision and said the matter would be raised with the Arab League and the Organisation of Islamic Cooperation.

During an April 2018 visit to Israel, Ms Dancila said she lacked the domestic support to make the move.

Jerusalem's status is one of the thorniest issues blocking any final settlement of the Israeli-Palestinian conflict.

Israel occupied east Jerusalem in the Six-Day War of 1967 and later annexed it in a move never recognised by the international community.

It considers the entire city its capital, while the Palestinians see the eastern sector as the capital of their future state.

The United Nations contends that the matter can be settled only between the Israeli and Palestinian people, and that until such a resolution, countries should not shift their embassies to Jerusalem.