PARIS (REUTERS) – On Christmas Eve 2015, with France reeling from terror attacks in Paris a month before, Emmanuel Macron sent a letter to the president and prime minister, urging sweeping measures to tackle French inequalities that he believed were fuelling extremism.

The economy minister, who had just celebrated his 38th birthday, didn’t expect his bosses to heed his advice, according to aides who described the letter to Reuters.

Macron had been feuding with Prime Minister Manuel Valls for months and grown increasingly frustrated with the slow pace of change under President Francois Hollande.

But the letter was a signal that he was preparing to go his own way, busting the constraints of French establishment politics.

For weeks, Macron and his aides had been discussing the launch of a grassroots movement that would transcend France’s long-entrenched left-right political divide. They had conducted a study of foreign movements, including centrist Ciudadanos and far-left Podemos from Spain, far-left Syriza in Greece and the 2008 campaign of Barack Obama.

Now, Macron felt it was time to act. Days after sending his letter, he gave his team a green light. Then in late January, over lunch with aides in his ministerial residence at Bercy, overlooking the Seine River, Macron and his aides approved the name of his new movement – En Marche! (Onwards!).

It was the start of an audacious run for the presidency by a man who has captivated the nation by refusing to play by the strict rules that have governed French politics for decades.

Now 39, and running on an independent ticket, he is the leading contender to become France’s next president in what is shaping up as a tightly contested two-round election to be held on April 23 and May 7.

To his fans, Macron is the jolt that France needs – a dynamic fighter for reforms who could pull the country out of its economic malaise and crisis of confidence.

To critics, he is an opportunist selling himself as a political rebel despite serving under Hollande for years and attending the same elite schools that have trained generations of French leaders. 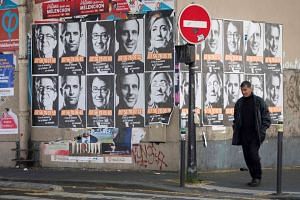 What you need to know about the French presidential election 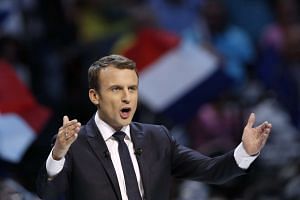 Macron does not. He wants to cut regulations that discourage entrepreneurship, reduce the size of the French state, welcome refugees and promote closer European integration. “In French politics, if you were neither right nor left you were nowhere. He has turned this into a strength,” said Pascal Lamy, the former head of the World Trade Organisation who has known Macron for over a decade.

If he is victorious, it will have major implications, not just for France, but for Europe.

After the anti-establishment wave that ushered in Brexit and US  President Donald Trump, a victory for Macron, a defender of liberal democratic values, would represent a backlash against the backlash.

“For someone like Macron to win in a country that views the EU, free trade and bankers with a great deal of skepticism would be remarkable,” said Charles Grant, director of the Centre for European Reform, a London-based think tank. “It would suggest that the populist wave may have reached its peak in France and in parts of western Europe.”

Macron grew up in Amiens, a city near France’s northern coast, the eldest of three children whose parents were doctors.

The defining relationship of his youth was with his maternal grandmother “Manette”, with whom he spent hours after school learning grammar, history and reading Moliere and Racine. A star in school, his mother recalls that he often stayed after class to debate with teachers rather than playing with other kids.

At the age of 15, he met Brigitte Auziere, a 39-year-old teacher and married mother of three. During theatre class on Friday afternoons, Auziere fell under the spell of the precocious teenager. “I felt like I was working with Mozart,” she confided to a friend, according to a 2017 biography of Macron by Anne Fulda.

The two fell in love, and after defying early efforts by Macron’s parents to keep them apart, married in 2007. Friends describe Brigitte Macron, a 64-year-old blonde with a caustic sense of humour, as Macron’s emotional anchor.  “He better run now,” she jokes in Fulda’s book. “Imagine what I’ll look like in 15 years!”

After finishing high school in Paris, Macron attended the prestigious Institut d’Etudes Politiques in Paris and the Ecole Nationale d’Administration (ENA), a training ground for French elites, where he graduated near the top of his class.

Fulda, who spoke extensively with Macron’s family and friends for her biography, sums up her findings this way: “Those who know him – or think they do – all sensed a steely determination from the start, an almost imperceptible feeling of superiority, an unshakeable confidence in his destiny that comes from an egocentrism that is deep seated and well concealed.”

People in his team describe someone who is pleasant, albeit demanding, to work with. Macron peppers his speeches with philosophical references and uses old-fashioned expressions like“bon sang de bonsoir” (for God’s sake) that are usually reserved for people twice his age. On the campaign trail he looks people in the eyes and listens attentively.

“He makes you feel like you are the most important person in the world,” says Dominique Moisi, the French political scientist and writer.

After his studies he joined the investment bank Rothschild, where he made nearly 3 million euros in four years, a chunk of it from advising Swiss food giant Nestle on its 2012 acquisition of Pfizer’s baby food business.

Introduced to Hollande in 2008, Macron joined his campaign team two years later. When Hollande defeated conservative incumbent Nicolas Sarkozy in 2012, he brought Macron into the Elysee Palace as an adviser on economic and European issues.

Just 34 at the time, Macron was relegated to a modest top-floor office under the eaves. But he didn’t shy away from speaking his mind, pressing Hollande on economic reform and dismissing his pre-election pledge to tax French incomes above 1 million euros at a 75 per cent rate with the jibe: “It’s Cuba without the sun.” Despite that, Hollande warmed to his provocative protege, irking others who viewed him as impudent and disloyal.

Laurent Fabius, foreign minister at the time, referred to him as the “the little powdered marquis”, according to French newspaper Le Monde.

Macron left two years later, frustrated that his ideas were not being translated into policy, aides and friends say.

By the summer of 2014, he had given up on politics and was planning to launch a consulting firm. But in late August, while riding his bike on the North Sea coast near Le Touquet, he got a call from Hollande’s office. Following the firing of economy minister Arnaud Montebourg, Hollande wanted to know if Macron would return to the government.

According to aides, Macron’s decision to launch his own campaign for the presidency can be traced to the first half of 2015, when he was preparing his first big initiative as minister.

The “Loi Macron”, as it came to be known, aimed to loosen Sunday shopping restrictions, liberalise the bus sector and deregulate professions like notaries.

Macron spent a huge amount of time discussing his bill with lawmakers and cobbling together what he believed was a bipartisan majority in support of it.

As his profile rose, Valls, who also declined comment, began to see him as a dangerous rival, according to several government officials.

Instead of putting the bill to a vote, Valls insisted on ramming it through parliament by decree – a move Macron and his aides believe was aimed at robbing him of a political victory.

“When I saw Emmanuel’s face as he sat there in parliament I thought he would resign that very evening,” his mother is quoted as saying in the Fulda book.

In the months that followed, as Macron’s popularity continued to rise, he and his staff began thinking about launching a political movement that built on the centrist consensus he had forged in parliament.

After the attacks by home-grown Islamist extremists on Nov 13, 2015 that killed 130 people, simmering tensions within the government boiled over.

Macron, in a preview of the argument he would make in his Christmas Eve letter to Hollande and Valls, told an event in Paris one week after the attacks that French society was “partly responsible” for the emergence of terrorism, citing a lack of opportunities in France’s bleak “banlieues”.

Days later, Valls rebuked Macron in parliament, saying his comments amounted to an apology for the extremists.

The prime minister later blocked a Macron bill on digital and labour market reform, distributing parts it to other cabinet members. Valls had made clear what he thought of the Christmas Eve letter, to which Macron never received a formal response.

TOO CLOSE TO CALL

After months of secrecy, Macron launched En Marche! in April and appeared a week later on the cover of glossy society magazine Paris Match with his wife under the headline “together on the road to power”.

Some members of the government reacted by vilifying Macron as an ungrateful “Brutus”. But the movement has since attracted some 250,000 followers. And Valls, defeated by Benoit Hamon in the Socialist primary, has said he will vote for Macron.

In recent months, everything has broken Macron’s way. Fillon, once the favourite, has been damaged by an investigation into whether he paid his wife a generous taxpayer-funded salary for work she didn’t do – a charge they both deny. And Hamon has flopped out of contention.

Polls now show that Macron will get around 23 per cent in the first round, making it into the second round on May 7 against Le Pen, whom he would almost surely beat.

Still, Melenchon and Fillon are hovering only a few points behind, making it a four-way race that is too close to call. Even a market-rattling runoff between Le Pen and Melenchon – who are both threatening to pull France out of the EU – cannot be ruled out.

A victory for Macron would be a blow to populism in Europe. And it would open the door to an elusive “grand bargain” with Germany – which holds its own election in September – on strengthening the fragile euro zone.

First, Macron would need to show he can deliver on reforms of the labour market and pare back a French state which accounts for 57 per cent of economic output, the highest level in Europe.

That would be a challenge. Macron may struggle to cobble together a centrist majority in parliament in legislative elections to be held in June. If he fails, he faces the prospect of an awkward “cohabitation” with Fillon’s conservatives.

“To get this majority, a lot of people will need to break party lines and take personal risks. It’s not going to be easy,”said Gilles Moec, an economist at Bank of America Merrill Lynch.