LONDON/BRUSSELS (REUTERS) - The EU’s chief Brexit negotiator told Britain on Wednesday (Jan 30) that time was too short to find an alternative to the Irish border arrangement agreed in their divorce deal, as London wants, and that this deal was not open for renegotiation.

With only two months left before Britain is due by law to leave the European Union, a narrow majority in the British Parliament instructed Prime Minister Theresa May on Tuesday (Jan 29) to go back to Brussels to revise what is arguably the most intractable part of the deal.

Mr Michel Barnier told France’s RTL radio that the two-year divorce negotiations had looked for an alternative to the “Irish backstop”, designed to ensure that the border between EU member Ireland and the British province of Northern Ireland, long a scene of sectarian violence, remains free of border posts.

“No one, on either side, was able to say what arrangement would be needed to ensure controls on goods, animals and merchandise without having a border,” Mr Barnier said. “We have neither the time, nor the technologies.”

The 11th-hour uncertainty leaves Britain’s investors and allies trying to gauge whether the crisis will end up in a deal, a chaotic "no-deal" Brexit on March 29, a delay, or no Brexit at all.

In essence, Mrs May will use the implicit threat of a "no-deal" Brexit to seek a deal from the other 27 members of the EU, whose combined economy is about six times the size of Britain’s.

But the European response has been united, and blunt.

My message to PM @theresa_may: The EU position is clear and consistent. The Withdrawal Agreement is not open for renegotiation. Yesterday, we found out what the UK doesn't want. But we still don’t know what the UK does want. #brexit

“The Withdrawal Agreement is not open for renegotiation,” European Council President Donald Tusk tweeted in what he said was a message to Mrs May.

EU officials said Mr Tusk and Mrs May had 45 minutes of "frank" discussion. Mr Tusk stressed that it is up to Mrs May to come back to EU with a proposal that she can convince the EU will get a majority in Parliament.

EU leaders in December simply did not believe Mrs May could get a majority if they gave her what she wanted and so they did not budge. For them to move now, she will have to show them that anything they give will be the final deal and it will be accepted. 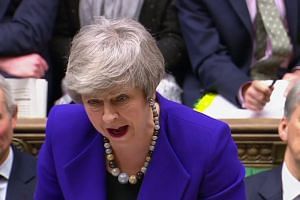 Mrs May indicated that she understood this but gave no indication of what she might ask for nor of the timeline for her next steps, although she indicated that meetings in Brussels would be useful at some stage, the officials said.

Mr Tusk made clear that it is up to Britain to come up with solutions, not the EU.

Mr Simon Coveney, foreign minister of Ireland, whose economy stands to suffer most from a “no-deal” Brexit, said Britain had not offered any feasible way to keep the border open.

“What we are being asked to do here is to compromise on a solution that works, and to replace it with wishful thinking,” he said.

And Irish Prime Minister Leo Varadkar told Mrs May by phone that “the latest developments had reinforced the need for a backstop which is legally robust and workable in practice”, an Irish government spokesman said.

European Commission President Jean-Claude Juncker said the chances of a “no-deal” exit had increased, and currency traders also took that view as sterling traded around US$1.3070, more than a cent down from its level before lawmakers voted on Tuesday.

EU sources said additional clarifications, statements or assurances on the backstop might be possible, short of reopening the agreement.

But Mrs May says she needs more – a legally binding change. She aims to get Parliament’s approval for a revised deal on Feb 13. If that fails, Parliament will vote on next steps on Feb 14.

That deadline ratchets up the pressure on dedicated Brexiteers in the Conservative Party who fear opponents will try to delay and ultimately thwart Britain’s exit.

Both Mrs May’s Conservatives and the main opposition Labour Party are formally committed to carrying out Brexit, but internally divided over how or even whether to do so.

Brexiteers accept that there is likely to be some short-term economic pain but say Britain will thrive in the long term if cut loose from European rules. Pro-Europeans say Britain’s exit will make it poorer, reduce its global clout, undermine London’s position as a global financial capital and weaken the West.

Britain voted 52 per cent to 48 per cent to leave the EU in a 2016 referendum. Brexit supporters say it would betray democracy to fail to act on that mandate. Opponents say voters may have changed their minds now that the details are becoming clearer.

Opposition Labour leader Jeremy Corbyn, who favours a much closer relationship with the EU, built around a customs union, met Mrs May to discuss Brexit.

“Jeremy made the case for our alternative plan,” the spokesman said, adding that the tone had been “serious and engaged” and that the two had agreed to meet again.

If Mrs May cannot get a deal agreed, the default option would be to exit the EU abruptly with no deal at all, which businesses say would cause chaos and disrupt supply chains for basic goods.

“This will hit Britain harder than others,” German Economy Ministry Peter Altmaier said. “The coming days must be used to finally prevent a hard Brexit.”

British lawmakers on Tuesday also approved a proposal urging the government to prevent a no-deal exit, sending a signal that a majority opposes it. However, they rejected two amendments that set out a clear path for Parliament to prevent it.

Many company chiefs are aghast at London’s handling of Brexit and say it has already damaged Britain’s reputation as Europe’s pre-eminent destination for foreign investment.