PARIS (REUTERS) - The race to become the conservative candidate for the French presidency and likely favourite to win the presidential election itself next year looked tighter than it has for months on Friday (Nov 18) with voting due to start in less than 48 hours.

Ahead of Sunday's vote - which will put two people forward to a run-off second round a week later - centrist ex-prime minister Alain Juppe was holding onto a shrinking lead.

Opinion polls show him winning both primary rounds and then going on to win a probable face-off against far-right National Front leader Marine Le Pen next May and become head of state. 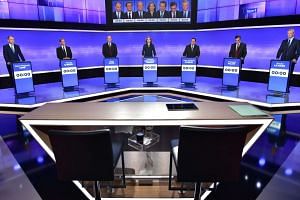 But Juppe is seeing his lead eroded by two men who sit to the right of him in the political spectrum - former president Nicolas Sarkozy and Francois Fillon, who was Sarkozy's prime minister between 2007 and 2012.

Sarkozy has long been Juppe's main rival, but Fillon has come from behind in the opinion polls in recent days, making the race even harder to call. Fillon was seen as the winner in Thursday's final debate before the weekend vote.

In addition, anyone can vote in the primary, which opens the way for tactical action by left-leaning and far-right voters.

Meanwhile, lack of confidence in pollsters, who failed to predict Donald Trump's US election win and Britain's vote to quit the European Union, has added to the uncertainty about the outcome of both the primaries and the election itself.

Particular focus is on Le Pen because she represents the same populist, anti-globalisation, anti-immigration positions that handed unexpected victories to Trump and Britain's Brexit camp.

So market analysts are taking the possibility Le Pen could become president more seriously, an event which some believe could spell the end of a weakened European Union and of the euro zone.

She has promised a referendum on France's membership of the EU, a potential "Frexit" that at least one leading investor, Columbia Threadneedle's Mark Burgess, has said would be a financial "catastrophe".

Polls have consistently shown Le Pen is very unlikely to win the presidency. The country's electoral system requires her to win over 50 per cent of votes in a second-round run-off, and she has persistently polled only around 30.

French pollsters have in recent elections have also tended to overestimate her appeal rather than underplay it.

Juppe was confident on Friday that no such upset will happen.

"I am not Hillary Clinton," he said on public radio in a reference to the losing candidate in the US presidential race."And France is not America."

France's ruling Socialists are deeply divided and seen as unlikely to figure beyond the first round of the election itself - leaving the way clear for whoever emerges as victor in the conservative primaries to face Le Pen in the deciding round.

Opinion polls aside, analysts reckon that should Sarkozy or Fillon be her opponent next May, her chances of winning are higher. In a note after Thursday's TV debate, for example, Charles Lichfield of Eurasia Group gave Le Pen only a 25 per cent chance if Juppe is her opponent.

But given Sarkozy's and Fillon's lack of appeal outside the right-wing electorate, the chances of a Le Pen victory against either of them would jump to 35 per cent," he said.

A flurry of polls in recent days have pointed to a tightening race in the primaries. The one with the biggest sample of voters, a Cevipof and Ipsos-Sopra Steria survey, showed Juppe scoring 36 per cent of votes in Sunday's opening round, five percentage points less than in October.

It gave Sarkozy 29 per cent, qualifying for a head-to-head second round runoff against Juppe a week later. Fillon was up 10 points on 22 per cent.

Significantly though, the poll said 23 per cent of voters were still unsure of their choice.