LONDON • Prime Minister Boris Johnson yesterday put Britain's departure from the EU at the top of the agenda, as Queen Elizabeth II read out his plans for government in a parliamentary ceremony following a sweeping election win.

The monarch formally opened Parliament with plenty of traditional pomp and pageantry before members of the Upper House of Lords and MPs from the Lower House of Commons.

But before the monarch's set-piece speech, Scotland's First Minister Nicola Sturgeon called for a new vote on independence, signalling a looming constitutional battle between London and Edinburgh.

Ms Sturgeon said Brexit and election results north of the border made a clear "constitutional and democratic case" for a fresh look about whether Scotland should end its more than 300-year-old union with England and Wales.

Top of Mr Johnson's to-do list is a Bill to ratify the terms of Britain's exit from the European Union, which he negotiated in October but could not get through a deadlocked Parliament.

Now, with a comfortable majority in the 650-seat House of Commons, he hopes to push through the deal in time to fulfil his election campaign pledge to "Get Brexit Done" on the next EU deadline.

"My government's priority is to deliver the United Kingdom's departure from the European Union on 31st January," the Queen confirmed from a gilded throne. "Thereafter, my ministers will seek a future relationship with the EU based on a free trade agreement that benefits the whole of the United Kingdom."

In a sign of the government's vow to keep to the Brexit timetable, a spokesman said the Department for Exiting the European Union "will be wound up once the UK leaves the EU on Jan 31".

The Queen's speech normally takes place about once a year, but there was one in October after Mr Johnson became Conservative leader in July following an internal party vote.

PRIORITY ON DEPARTURE FROM EU

My government's priority is to deliver the United Kingdom's departure from the European Union on 31st January. Thereafter, my ministers will seek a future relationship with the EU based on a free trade agreement that benefits the whole of the United Kingdom.

Rebellion over Brexit left him without the Commons support he needed to govern, so he called a snap election and won by a landslide. As a result, yesterday's speech was scaled down, with the 93-year-old monarch eschewing her horse-drawn carriage for a car, and her regalia for a matching coral green hat and coat.

The highlight of the proposed legislation was the Withdrawal Agreement Bill (WAB) to ratify the terms of Brexit, which will be put to a first vote among MPs today.

It covers Britain's financial obligations to the EU, the rights of European expatriates and new arrangements for Northern Ireland.

The Bill will also enshrine the dates of a transition period, which will keep EU-UK ties largely unchanged until Dec 31 next year, to allow both sides to sign a new trade deal. The period can be extended for up to two years but London insists this will not be necessary. 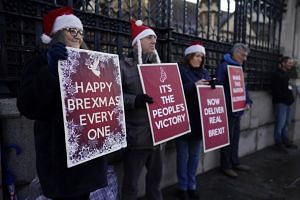 British PM Boris Johnson to set out plan for power, with focus on delivering Brexit

Mr Johnson, a leading figure in the 2016 referendum vote for Brexit, says it is time to end years of political wrangling over the result.

But the EU has warned that the timetable is extremely tight to agree on a new relationship after Britain leaves the bloc's single market and Customs union.

The WAB also includes plans to allow courts other than the Supreme Court to overturn European Court of Justice rulings, to ensure Britain can more swiftly extricate itself from European case law.

The Tories may have won a majority countrywide in the Dec 12 polls, but lost over half their seats in Scotland on a campaign opposing a fresh independence vote.

Ms Sturgeon said sweeping victories by her Scottish National Party in the three general elections since 2015 made the case for a new referendum "unarguable".

"Scotland made it very clear last week it does not want a Tory government led by Boris Johnson, taking us out of the European Union," Ms Sturgeon told a news conference. "That is the future we face if we do not have the opportunity to consider the alternative of independence."

Scots voted against independence in 2014, but two years later, a majority said they wanted Britain to stay in the EU, unlike voters in England and Wales. Pro-independence campaigners said that shows a "material change in circumstances" in Scotland's ties with the rest of Britain.

The future Scots chose in the EU referendum "is simply no longer available to them", said Ms Sturgeon. "That is not a union worthy of the name and it is not of equals."

She called on London to transfer powers allowing the devolved administration in Edinburgh to hold the vote.