PARIS (AFP) - The killing of Iranian commander Qassem Soleimani in a US air strike offers a chance for Iran's clerical rulers to rally popular support at an extremely delicate time for the Islamic republic in the wake of unusually fierce protests.

Yet while there has been a genuine outpouring of emotion and anti-American sentiment among Iranians after the killing of Major General Soleimani in Baghdad, the economic hardships that prompted last November's protests are still in place, analysts say.

The protests, which came as US sanctions cripple Iran's economy, were seen as one of the biggest challenges for its leaders since the Islamic Revolution that ousted the shah in 1979 and led to a long-term rupture in US ties.

People have packed the streets in cities across Iran for ceremonies commemorating Maj Gen Soleimani, the mastermind of Iran's operations in Iraq, Syria and Yemen, and seen by some as the de facto number two after supreme leader Ayatollah Ali Khamenei.

"There's a rally around the flag within the regime. Soleimani had good relations with many regime officials from all sides of the political spectrum," said Ms Ariane Tabatabai, an associate political scientist at the Rand Corporation, a policy think tank in California.

"But within the population, the grievances that led to the November protests are still there," she added, saying Iran's leaders could use it as a "further excuse" to crack down on dissent.

Western rights groups have said the protests, which began on Nov 15 in response to a surprise petrol price hike, were quashed with ferocious force.

Officials in Iran have yet to issue an overall death toll for the days of unrest, but Amnesty International says more than 300 people were killed in the crackdown.

The IMF estimates the Iranian economy contracted 9.5 per cent last year after Washington's pullout from the 2015 deal curtailing Teheran's nuclear programme, which was supposed to give sanctions relief.

According to Mr Ray Taykeh, senior fellow for Middle East studies at the Council on Foreign Relations, Iran's economy "has essentially collapsed", with the country now "struggling to meet its domestic budgetary needs".

But throughout its four-decade history, the Islamic republic has mobilised support by focusing on the twin elements of consistent revolutionary fervour and confrontation with the United States. 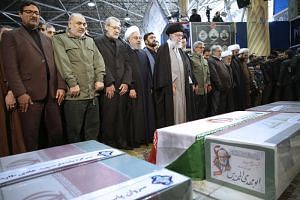 American strike in Iraq prompts anti-war protests in US cities

From war to diplomacy, Iran weighs response to Soleimani's killing

The killing of Maj Gen Soleimani - followed by provocative comments by US President Donald Trump that the United States could target Iranian cultural sites if Teheran retaliated - only fuels this narrative.

There have been massive turnouts at the ceremonies for Maj Gen Soleimani not just in Teheran but also cities like Ahvaz, which saw major unrest in November.

"They (Iran's rulers) have the chance to deflect the blows. Not for a very long time but there will be a popular emotion" said Mr Francois Nicoullaud, a former French ambassador to Teheran. "In the Iranian imagination, he had a great profile as a soldier."

Maj Gen Soleimani was widely popular, famed for suddenly popping up in Middle East conflict zones and credited within the country for helping defeat Islamic State of Iraq and Syria (ISIS) jihadists in Syria and Iraq.

But Ms Tabatabai said that among younger Iranians, Maj Gen Soleimani was the "face of Iranian defence against outside adversaries" but also "the face of an organisation responsible for repression and atrocities".

His killing also comes at a critical political juncture for President Hassan Rouhani, seen as a more moderate figure, who is under pressure from hardliners just a six weeks ahead of parliamentary elections.

"It's now almost guaranteed that the Iranian parliament will fall into the hands of the most hardline and militant elements within Iran," said Mr Ali Vaez, Iran analyst for the International Crisis Group (ICG).

For Teheran, the key challenge is how to carry out its pledge to retaliate against the United States, a move that Mr Khamenei is likely to weigh carefully given its impact at home and abroad.

"The question is what is their calculation," he added.