MOSCOW (BLOOMBERG) - When Greece, traditionally among Russia's closest friends in Europe, expelled two Russian diplomats last month for trying to wreck a deal with the neighbouring Republic of Macedonia, it exposed Moscow's deepening frustration at President Vladimir Putin's loss of influence in a key strategic region.

Russia's being squeezed out of the Balkans by the expansion of the European Union and the North Atlantic Treaty Organisation (Nato), leaving the Kremlin with diminishing clout in south-eastern Europe.

There's little chance of reversing that trend, according to four people in Moscow familiar with its Balkans policy.

"Nato membership of course is bad for us," said Leonid Reshetnikov, a former head of Russian foreign intelligence who also served as an agent in Greece and the Balkans. "What can we do? They are clearing this territory" of rival influences, he said.

Russia's deep historical and cultural ties to the Balkans made the region a preserve of pro-Moscow sentiment that ensured warmer relations than with much of the rest of Europe. Now Balkan states are becoming bound in with the West as they gravitate towards the EU and Nato.

Even amid divisions within the EU and questions raised by President Donald Trump about the US commitment to its Nato allies, the blocs still exert a strong pull in the region with their promises of rising trade and living standards, strengthened rule of law and security guarantees.

Russia's shrinking geopolitical reach is a historic setback for Putin, even as the Kremlin leader's global power appears to be on the march, from Syria to meddling in US politics.

"Russia is acting pretty passively,'' said Alexander Dugin, a nationalist thinker and one-time Kremlin adviser who promotes a vision of Russian dominance across Europe and Eurasia. "It needs a plan of action."

Greece expelled the Russian envoys after accusing them of bribing officials in an attempt to block the accord that settles a dispute over the Republic of Macedonia's name and allows it to start talks on Nato membership.

Russia's foreign ministry accused Athens of joining in "dirty provocations," prompting a Greek demand that "the constant disrespect for Greece must stop."

Under the deal, the Republic of Macedonia will become the Republic of North Macedonia after Greece objected that the former Yugoslav republic's title implied a territorial claim on its province with the same name.

Greece is "fully determined" to ratify the agreement, said Costas Douzinas, a member of the ruling Syriza party and head of the parliamentary committee on defence and foreign relations.

"If the Russians continue to attempt to derail it, the reaction will be strong."

Even the pro-Russian Independent Greeks party, the junior coalition partner in Prime Minister Alexis Tsipras's government, accuses Moscow of meddling, even as it opposes the accord.

There's "first-hand information that there was Russian interference in Greek matters," the party's vice president, Panos Sgouridis, said by phone. "It's crucial that Greece's national sovereignty is protected."

The Republic of Macedonia plans to hold a referendum on Sept 30. The deal is opposed by President Gjorge Ivanov, while Prime Minister Zoran Zaev has accused unnamed Greek businessmen sympathetic to Russia of inciting protests against it.

Last month, the Organised Crime and Corruption Reporting Project, a consortium of investigative reporters, cited the Republic of Macedonia's Interior Ministry documents as saying that Greek-Russian billionaire Ivan Savvidis paid 300,000 euros to opponents of the accord. A representative for Savvidis denied the claim.

The former Yugoslav republic "will be in Nato," said Frants Klintsevich, a member of the defence and security committee in Russia's upper house of parliament. Moscow views the expansion of the alliance as reinforcing "the circle of enemies around Russia," he said.

The tensions follow accusations by Montenegro that Russia was behind a failed coup attempt during 2016 parliamentary elections in a bid to derail its entry into the US-led military alliance last year. Two Russian intelligence officers are among 14 people charged with the plot by Montenegrin prosecutors. Russia denies any involvement.

Konstantin Malofeev, a wealthy Russian businessman and Putin ally, who's been sanctioned by the EU for backing insurgents in eastern Ukraine and has cultivated links to far-right parties in Europe, warned ominously of a backlash in Greece. A June opinion poll in Greece showed almost 70 per cent of Greeks opposed the agreement with the Republic of Macedonia. 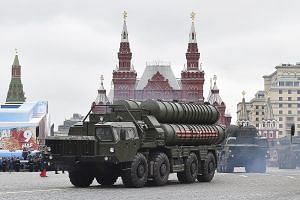 Here are all the countries that have expelled Russian diplomats

Russia's sometimes heavy-handed efforts to stem the West's growing influence have provoked alarm, particularly after the 2014 annexation of Crimea and support for rebels fighting in eastern Ukraine. Moscow's fear is that it may be left without partners in the region.

Albania and Croatia are Nato members, while Bosnia and Herzegovina says it wants to join, though Bosnian Serbs with ties to Russia threaten to block any attempt. Even Russia's closest regional ally, Serbia, has joined Nato's Partnership for Peace cooperation programme.

Meanwhile, the EU has dangled the prospect of membership as early as 2025 for Serbia and five other Balkans states.

Ranged against Russia are the US and its European allies.

US Vice-President Mike Pence spoke by phone to Tsipras and Zaev on July 5. He later tweeted that "successful implementation'' of the agreement "will open the door to European integration'' for the Republic of Macedonia.

German Foreign Minister Heiko Maas said July 30 that it's in the EU's "strategic interest" to expand into the western Balkans.

"It will be a very big blow" for Russia if Serbia, which Nato forces bombed in 1999 during the Kosovo crisis, eventually joins the alliance, said Nikita Bondarev, a Balkans expert from the Russian Institute for Strategic Studies, which advises the Kremlin.

"We will become almost friendless in south-eastern Europe."