Four members of the group had spent a night in police custody and a day awaiting a court hearing in Moscow only for a judge to refuse to hear the case over technicalities.

Police then took them back to a station and released them shortly after midnight, one of the members, Pyotr Verzilov, wrote on Twitter.

Pussy Riot activists have faced a bewildering array of legal actions after they briefly invaded the pitch during the World Cup final on July 15 in Moscow's Luzhniki stadium dressed as police, in what they later called a political protest.

Verzilov, Veronika Nikulshina, Olga Kuracheva and Olga Pakhtusova have already served a 15-day sentence for breaking the rules for spectators at a sporting event. They were also fined 1,500 rubles (S$32.60) each for wearing police uniforms.

"Free after 16 days of arrest!" Verzilov wrote on Twitter, posting a picture of the four dancing in a car park.

They ran onto the pitch in the second half of the game between France and Croatia, watched by President Vladimir Putin and world leaders including French President Emmanuel Macron.

When they were released from police cells after serving their sentence on Monday, they were immediately detained again by police and held for a further night.

The next day they were awaiting a hearing in Moscow's Khamovnichesky district court for the administrative offences of holding an unsanctioned protest and disobeying police. 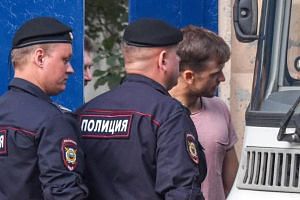 Late on Tuesday, the judge refused to hear the case and "returned all the administrative materials" to police, a court official told TASS state news agency.

The activists must now return to the police station on Friday, and they said they could face up to 25 further days in jail.

Pussy Riot wrote on Facebook that staging an "artistic action" should not fall under a law regulating public rallies.

In 2012, Pussy Riot came to international attention for holding a protest in a Moscow church. Two members served jail terms, while another was given a suspended sentence.