Massed in front of two big screens airing live coverage of the pivotal vote, the crowd of fervent pro-Europeans erupted into cheers and clapping as the result was relayed.

"I'm so pleased - but a bit concerned with what comes next," retiree Sarah Cuthbertson, 68, told AFP.

"I didn't think it would be such a big majority against," she said of the whopping 230-vote margin of defeat - the largest ever in modern British political history.

Nearby, a smaller contingent of pro-Brexit activists were similarly cheered by the defeat of Prime Minister Theresa May's deal, but for different reasons.

But he conceded that Parliament's rejection of the government's plan puts Brexit in some jeopardy.

"I'm very worried they (MPs) might try to hijack the process." 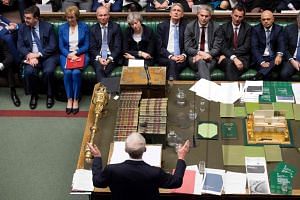 Brexit in dates: From Leave shock to Parliament's historic vote

Deploying flags, floats and even a mock-up of the Titanic dubbed "HMS Brexit", hundreds of noisy pro- and anti-EU activists had descended on Westminster to make their voices heard ahead of the crunch vote.

"The only thing so far that managed to unite the country has been this deal and how everyone hates it," Mr Simon Fisher, 25, told AFP, draped in a "Leave Means Leave" flag.

As opposition Labour leader Jeremy Corbyn announced he had filed a no-confidence motion in the government, pro-EU supporters urged him to go further.

"Unless he changes his stance on a second referendum, I don't think he'll get people on board," said Mr Lesley Lacloche, 61, who was draped in EU attire.

Some waved signs and placards like "Don't Let May Betray the UK" and "Stop the Brexit Mess".

'Brexit is a sinking ship'

Crowds converged on the square and street opposite the Palace of Westminster - the formal name for the Houses of Parliament and grounds - from the early hours of the morning, under the gaze of TV cameras beaming the images around the world.

In one of the more eye-catching displays, pro-EU protesters reimagined the Titanic disaster, erecting a cardboard ship, iceberg and caricature of Prime Minister Theresa May on the bow beside a life-ring.

"Brexit is a sinking ship," said Mr Bert Wander, one of the organisers.

Demonstrators had lined the walkways around nearby makeshift broadcasting studios, with each side staking out their camp and no mingling on show.

"I would have talked to them, but because they are abusive, no," said 65-year-old Sally Smith, pointing to the pro-EU faction.

The no-deal Brexit supporter had taken the day off work to come and make her point - by frantically ringing a bell.

In the opposite camp, Ms Louise Hummerstone, a 66-year-old potter and craftswoman wearing an EU beret, admitted that she had "lost friends" who voted Leave in the 2016 referendum.

"I can understand naive voters, I completely understand people who believed the lies, but I cannot tolerate those who voted for racist reasons," she said.

Despite the entrenched opposition, the atmosphere remained mainly civil as large numbers of police looked on.

However, officers detained one pro-Brexit demonstrator after a face-off between the rival camps.

The anti-EU protesters shouted "scum" at officers as they led the handcuffed man away.