Brexit Secretary Stephen Barclay has suggested that a vote could take place next week, after Mrs May meets European Union leaders in Brussels tomorrow, when she is expected to request an extension to the Brexit negotiation period known as Article 50.

But she is "unlikely" to hold a another vote before the summit.

If lawmakers agree to back Mrs May's deal in a third meaningful vote, the government could find a way round Mr Bercow's ruling, Mr Barclay indicated.

Mr Bercow's ruling - that a deal in "substantially the same" form cannot be brought back for another vote once it had been defeated - now paves the way for a series of other options that had been swept off the table last week.

With just nine days until Britain is legally stipulated to leave the bloc on March 29, the intervention has frustrated some Brexiteers as the nation's departure now remains even more uncertain, with the likelihood of a long postponement or, worse, Brexit not materialising at all.

The ruling also opens the door to a softer Brexit, with Britain remaining in the EU's Customs union, and the possibility of a second referendum on EU membership. 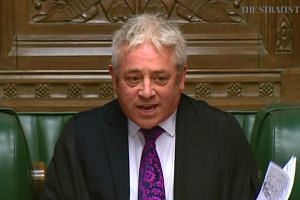 Professor Marc Stears, director of the Sydney Policy Lab at the University of Sydney and former chief speechwriter for Britain's opposition Labour Party, said: "The whole Brexit project is now in serious peril as few possibilities present themselves other than a request for a long delay.

"Theresa May and her deal have bounced back from blow after blow, but it is hard to see how she recovers this time."

Senior EU diplomats said the bloc's leaders could delay making a final decision at the summit on any extension, as this is dependent on exactly what Mrs May asks of them, a Reuters report said.

Some EU leaders still remain divided on whether to grant an extension at all. Any agreement from the EU could come just days ahead of Britain's legal departure date next Friday.

"We are now exactly 10 days away from the United Kingdom's withdrawal from the European Union," European Commission spokesman Margaritis Schinas said at a briefing yesterday.

"It will be for the Prime Minister and Her Majesty's government to decide on the next steps and then to inform us accordingly and swiftly."

EU ministers have also asked for "clear and precise" proposals, appealing for clarity on the issue.

Prof Stears added: "What it (Mr Bercow's ruling) shows most of all, though, is that nobody really knows what will happen next.

"Each step of the way, Brexit has proved more difficult and more divisive than even its biggest opponents imagined when the negotiations began only two years ago. Almost anything remains possible today."