VATICAN CITY (AFP) - The 12 Syrian asylum seekers Pope Francis brought back with him from Lesbos are settling into new lives, with Italian lessons and strolls around Rome, their hosts said Monday.

The three Muslim families are being housed temporarily by the Saint'Egidio religious community in the Rome district of Trastevere while they await longer-term accommodation being prepared for them in the Vatican, said community spokesman Maximiliano Signifredi.

"Yesterday they had their first Italian lessons. They have been going for walks around Trastevere, a new life is opening up in front of them," he said. "Each of the three families has been assigned a small flat with everything they need while they are awaiting the more spacious apartments the Vatican is getting ready for them."

One of the refugees, Hassan, a 30-year-old who had fled Damascus with his wife Nour and son Riad, 2, told a press conference he felt he was living in a dream.

"The pope is an amazing person. We hope every religious person should be like the pope," Hassan said, before poignantly observing that the pain of leaving friends and family behind in war-torn Syria would not pass easily," he said. "You can find a new place but you cannot find a new family.

"The pope is the miracle, the angel who saved us," said Osam, who also fled Damascus, along with wife Wafaa and their two children, aged 8 and 6. "Peace has no borders." 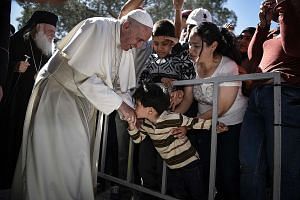 Refugee families hail Pope for taking them in 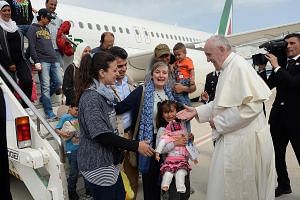 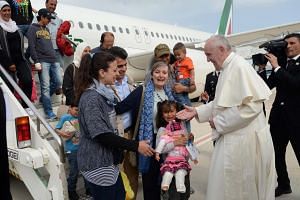 In Pictures: Pope Francis arrives in Rome with Syrian refugees from Lesbos camp

In a dramatic gesture designed to highlight the plight of hundreds of thousands of refugees arriving on the southern shores of Europe, Francis on Sunday flew back from Lesbos with the 12 Syrians.

The three couples, who have six children between them, were plucked from a detention camp on the Greek island to start new lives, nearly 2,300 kilometres from their homes in Damascus and Deir Ezzor, a city in eastern Syria controlled by the Islamic State group.

Francis said on the plane back from Lesbos that the families had been chosen out of some 3,000 people at the camp simply because their paperwork was sufficiently in order to rapidly conclude an accord on their transfer with the Greek and Italian governments.

"I didn't make a choice between Christians and Muslims. All refugees are children of God," Francis told reporters.

The families are expected to seek asylum in Italy rather than through the tiny Vatican city state.

The Vatican was already housing two Syrian families in line with Francis's instruction to every Catholic parish in Europe to take in at least one.

The St Egidio community is very active on migration issues and has organised flights to Rome for dozens of Syrian refugees who are housed in the same building as the families brought back by the Pope.