BELFAST (REUTERS) - Northern Irish police said on Wednesday (Feb 12) they had charged a 52-year-old man with the murder of journalist Lyra McKee in Londonderry last year, a killing that sparked outrage in the British-run province.

The local man was arrested by detectives on Tuesday and taken to Belfast where he was also charged with possession of a firearm with intent to endanger life and with professing to be a member of a proscribed organisation.

The man will appear at Londonderry Magistrates Court on Thursday, the police said in a statement, and is one of several individuals under investigation in relation to the murder of the 29-year-old McKee.

"I have always said a number of individuals were involved with the gunman on the night Lyra was killed," Detective Superintendent Jason Murphy said in a statement.

"And while today is significant for the investigation the quest for the evidence to bring the gunman to justice remains active and ongoing."

The New IRA, among a small number of groups that oppose q 1998 peace accord that largely ended sectarian bloodshed in Northern Ireland, said one of its members shot McKee when they opened fire towards police during a riot she was watching.

Her death was condemned at the time by both Irish Catholic nationalist and pro-British Protestant unionist politicians.

McKee, who was named Sky News Young Journalist of the Year in 2006, was writing a book on the disappearance of young people during the violence in Northern Ireland.

She had also written about her struggles growing up gay in the British province. 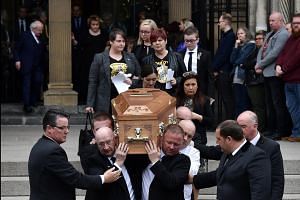 A Police Service of Northern Ireland spokeswoman said a 29-year-old man arrested under the Terrorism Act on Tuesday in connection with McKee's killing had been released without charge.

Two other men aged 20 and 27 have been freed pending a report to the Public Prosecution Service.