LONDON (REUTERS, AFP) - British Prime Minister Theresa May is under growing pressure from within her Conservative Party to lead Britain out of the European Union in the next few months, even if it means a no-deal Brexit, The Sun newspaper reported.

A letter signed by 170 of the 314 Conservative lawmakers in Parliament, including 10 Cabinet ministers, was sent to Mrs May after her Brexit deal was rejected for a third time by the House of Commons on Friday (March 29), the newspaper reported.

The vote left Britain's withdrawal from the EU in turmoil on the day that the country was originally due to leave the bloc.

Mrs May has raised the prospect of a long delay to Brexit because of the deadlock in Parliament, where she does not have a majority. Many of her own lawmakers have long demanded a more immediate break from the EU.

Britain has less than two weeks to convince the 27 other EU countries that it can solve the impasse, or risk leaving the bloc on April 12 with no deal to soften the economic shock.

"We want to leave the EU on April 12 or very soon afterwards," The Sun quoted a Brexit-supporting minister as saying in reference to the letter.

A spokesman for Mrs May declined to comment on the letter. 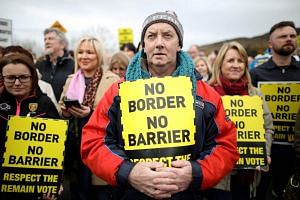 Conservative Party chairman Brandon Lewis said he was aware of the letter but had not seen it.

The 650-seat lower house of Parliament has voted overwhelmingly against a no-deal Brexit but its view is non-binding.

On Monday (April 1), lawmakers will try to agree on an alternative Brexit plan. The options that have so far gathered most support involve closer ties to the EU and a second referendum.

The government is opposed to revisions of its Brexit strategy and Mrs May pointed out on Friday that any options would still require first that Parliament approve her withdrawal agreement - the document spelling out the terms of the divorce.

The withdrawal agreement allows for a long transition period which would temporarily maintain the status quo to give individuals and businesses time to adapt to the future Britain-EU relationship.

The BBC said government officials had not ruled out the possibility of a run-off vote in Parliament next week between the most popular option proposed by lawmakers and Mrs May's deal.

Mr Lewis, the Conservative Party chairman, said all options were on the table but that a Customs union with the EU - an idea backed by the opposition Labour Party and some Conservatives - would be difficult.

"We've got to look at what we can do next and we have to do something different," he told BBC radio when asked if Mrs May might try to put her withdrawal agreement to a parliamentary vote for a fourth time. 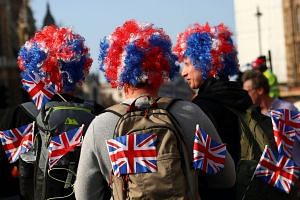 "Parliament will continue this process on Monday and we've got to look at all the options."

A Customs union would fly in the face of the Conservative Party's pledges before the 2017 national election and would not respect the outcome of the 2016 Brexit referendum, Mr Lewis said.

In that referendum, Britain voted to leave the EU, forcing the resignation of prime minister David Cameron and dealing the biggest blow since World War II to the European project of forging greater unity.

When asked if a way out of the impasse was to hold a fresh national election, Mr Lewis said he did not think British voters wanted to return to the polls.