From cosy cafes with freshly baked bread to coffee carts, art installations and relaxation rooms, the French hosts of UN-led climate talks in Paris have tried to make a vast conference venue on the northeast edge of the capital as comfortable as possible.

It is a clever ploy. Past UN climate venues have sometimes been unpleasant, cramped and with terrible food - that's bad for lifting the moods of tired, stressed out, over-caffeinated negotiators.

In Paris, delegates from nearly 200 countries are under pressure to agree to a historic climate change pact that will set a new direction for the global economy. The pact aims to drive economies away from polluting fossil fuels towards huge investment in green energy.

More than 150 world leaders, on Monday's opening of the talks, gave negotiators a clear directive: Get a deal done by the end of next week.

Despite the pressure, the mood remains upbeat, negotiators and observers say, even though tough issues remain unresolved.

"There's a lot of good coffee around. That certainly helps," said Mr David Waskow, director of the International Climate Initiative at the World Resources Institute, a Washington-based think tank.

He welcomed the clear direction from leaders on Monday. "Now we're really in the trenches to negotiate the agreement," he told The Straits Times. "There is progress happening but it's probably a bit too slow at the moment," he said, adding negotiators needed to further refine the draft agreement text ahead of the arrival of ministers over the weekend. 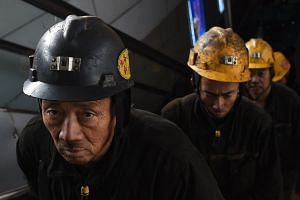 Negotiators are working late into the night in Paris, but a major sticking point is poorer nations insisting wealthier states make good on a previous pledge to commit at least US$100 billion (S$141 billion) in climate cash from 2020. Developing countries say they need the funds to green their economies. Affordable access to green energy technology is another key demand of theirs.

Another concern is the strength of the agreement and whether it will set ambitious targets to cut emissions and curb the pace of global warming. Vulnerable nations, such as poor African states and low-lying island nations, are demanding tougher targets in the agreement.

"I think there is a mood that people want an agreement from this meeting," said Dr Ian Fry, climate change ambassador for the tiny Pacific island of Tuvalu and a veteran climate negotiator.

"The critical thing is what will that agreement deliver? Will it deliver a significant outcome that will drive us towards a temperature goal that will satisfy people like those in Tuvalu?

"And we don't think that's going to happen. So it's going to be a very soft agreement," he said. Tuvalu, with 10,000 people, fears being wiped off the map by rising seas.

His views were echoed by Mr Alden Meyer, director of Strategy and Policy at the Union of Concerned Scientists in Washington and a veteran of the UN climate talks process. "I think we will come out of here with an agreement. The real question is how ambitious an agreement it will be," he told The Straits Times.

As the negotiations become more intense, the French have come up with a solution. They have created several relaxation rooms for delegates to put their feet up or have a snooze. And for those too stressed out or in need of inspiration, there is always the meditation room.