PRINCETON (REUTERS) - A Russian chemist who helped develop the Soviet-era nerve agent used to poison a former Russian double agent in southern England said only the Russian government could have carried out the attack with such a deadly and advanced toxin.

Vil Mirzayanov, 83, said he had no doubt that Russian President Vladimir Putin was responsible, given that Russia maintains tight control over its Novichok stockpile and that the agent is too complicated for a non-state actor to have weaponized.

"The Kremlin all the time, like all criminals, denying - it doesn't mean anything," Mirzayanov said in an interview in his home in Princeton, New Jersey, where he has lived in exile for more than 20 years.

Sergei Skripal, a former Russian military intelligence agent who betrayed dozens of Russian agents to British intelligence, and his daughter are fighting for their lives after they were found on March 4 collapsed on a bench, having been poisoned with Novichok, according to British authorities.

British Prime Minister Theresa May said on Monday (March 12) that it was "highly likely" that Putin was behind the attack, a charge Russia denies.

May on Tuesday gave Russia a midnight deadline to explain how the toxin showed up in the southern England cathedral city of Salisbury.

Russian officials have described the British allegations of Kremlin involvement as a "circus show." They say Britain has produced no concrete evidence that the Russian state was involved, has refused to share technical information about the poisoning with Russian scientists, and is bent on discrediting Russia before its hosts the soccer World Cup in June and July. 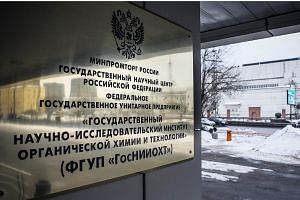 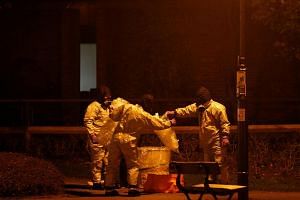 Mirzayanov said he spent years testing and improving Novichok, the name given to a group of chemical weapons that Russia secretly created during the latter stages of the Cold War. The weapon is more than 10 times as powerful as the more commonly known VX, another nerve agent.

The programme eventually produced tons of the agent, the dissident said, which Russia has never acknowledged.

"Novichok was invented and studied and experimented and many tons were produced only in Russia. Nobody knew in this world," Mirzayanov said in an interview on Tuesday at his home in a leafy suburb 35 miles (56 km) southwest of New York City.

In the early 1990s, as countries around the world began signing the Chemical Weapons Convention, a multinational arms treaty to prevent the development and use of chemical weapons, Mirzayanov grew angry that Russia was hiding Novichok's existence.

He was fired and jailed after detailing the new generation of chemical weapons in a news article, though the charges were eventually dismissed under pressure from Western officials.

He moved to the United States, where he published a book exposing what he knew about Russia's covert Cold War chemical weapons programme.

The effort involved as many as 30,000 or 40,000 people, he said, including perhaps 1,000 who worked on Novichok specifically, though many were not aware of the program's true nature.

The agent can be synthesized by mixing harmless compounds together. That made it easier for Russia to produce materials for Novichok under the cover of manufacturing agricultural chemicals, he said.

Novichok attacks the nervous system, making it impossible for victims to breathe and causing unimaginable pain, said Mirzayanov, who watched countless lab animals, including mice, rats and dogs, subjected to the poison.

"It's torture," he said. "It's absolutely incurable." Mirzayanov said Putin likely chose to use a painful nerve agent to frighten other dissidents into silence.

"I was shocked," he said. "I never imagined even in my bad dreams that this chemical weapon, developed with my participation, would be used as a terrorist weapons."