BERLIN (AFP) - US President Barack Obama, on a farewell visit to Europe, said Thursday (Nov 17) he hoped Donald Trump would “stand up” to Russia but added he was “cautiously optimistic” about his successor in the White House.

Speaking in Berlin, Obama also praised as an “outstanding” international partner his host Angela Merkel, seen by many as a new standard bearer of liberal democracy as the world tensely awaits how Trump will reshape the global order.

In a joint news conference, Obama and Merkel stressed the need for a strong Nato, free trade and action on climate change, as Western leaders brace for potentially radical changes after Trump moves into the Oval Office in January. 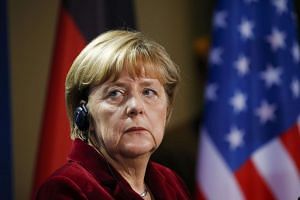 Citing the Syria and Ukraine conflicts, Obama said he hoped Trump, who has voiced admiration for President Vladimir Putin, “is willing to stand up to Russia where they are deviating from our values and international norms”.

He said Russia has “influence around the world” but cautioned Trump against the temptation to “take a realpolitik approach” and “cut some deals with Russia” that hurt smaller countries including Syria because it may seem convenient at the time.

“And that will be something that I think we’ll learn more about as the president-elect puts his team together,” he said.

Despite adopting a sombre tone during his sixth and last visit to Germany as US president, Obama said he was nevertheless “cautiously optimistic about my successor and the shift from campaign mode to governance”.

He said “there’s something about the solemn responsibilities of that office... that forces you to focus, that demands seriousness”.

“And if you’re not serious about the job, then you probably won’t be there very long.”

But he also had a jab at Trump’s populist campaign in what has been dubbed the “post-fact era”, saying that “if we can’t discriminate between serious arguments and propaganda, then we have problems”.

With nationalists on the rise on both sides of the Atlantic, he warned that if voters and politicians adopted absolutist views and demonised their opponents, “then democracy will break down”.

As Obama exits the stage, many observers say Merkel’s role as a defender of Western values will only continue to grow, assuming that as expected, she runs for a fourth term next year.

During eight years in office, Obama has relied on Merkel’s strength in Europe on several fronts, including staying in contact with Putin to seek to defuse the Ukraine conflict and taking in hundreds of thousands of Syrian refugees.

In the three-day visit to Berlin, Obama dined with Merkel on Wednesday before both were set on Friday to meet the leaders of Britain, France, Italy and Spain.

Obama praised Merkel as a leader who had shown “her integrity, her truthfulness, her thoughtfulness”.

“Chancellor Merkel is perhaps the only leader left among our closest allies that was there when I arrived,” he said of the chancellor who has been in office for 11 years.

“It’s up to her whether she wants to stand again... but if I were here and I were German and I had a vote, I might support her.” Obama acknowledged that Merkel would have big international burdens to shoulder.

“I wish I could be there to lighten her load. But she’s tough,” he added.

Merkel replied that “I know many people, including many, many politicians, who are committed to the same values of democracy, liberal and open societies, respect for human dignity, and I therefore believe that this will be a common struggle”.

She admitted “it’s hard to say goodbye” to Obama but added that “we are all politicians and democracy is based on change. The task is, since it’s in Germany’s interest to have good transatlantic ties, to look to the future”.

Obama held the biggest rally of his 2008 campaign in Berlin, using the once-divided city’s rebirth as a symbol of progress as he made a hopeful call for a world without nuclear weapons to 200,000 cheering fans at the Victory Column monument.

He and Merkel, who took power in 2005, soon developed a strong partnership, despite rifts over revelations of NSA spying on Merkel’s mobile phone and Obama’s vocal opposition to Germany’s austerity-driven response to the European debt crisis.

Merkel admitted that a project both had hoped for, a trade deal between the European Union and United States, would not be concluded now, following the election of Trump, who opposes the planned accord.

“We have made a lot of progress on the negotiations, but it will not be concluded now,” she said, adding hopefully that “I am sure that one day we can come back to it.”