LONDON (WASHINGTON POST) - Britain's scavenging tabloids have not been kind to Meghan, the Duchess of Sussex - the wife of Prince Harry.

Since she began dating Prince Harry in 2016 - then an actress known as Meghan Markle - she has been vilified, her every move intensely scrutinised by an unforgiving press.

Personal family relationships have been thrust into the global spotlight.

Her guest-edit of British Vogue was picked apart. And she was smeared in the tabloids for allegedly driving a rift between brothers Prince William and Harry.

In a new and emotional interview with British broadcaster ITV, Meghan opens up for the first time about life as a new mother and what being under the ever-watchful eye of the British tabloids has done to her mental health.

"Look, any woman, especially when they're pregnant, you're really vulnerable, so that was made really challenging," she said in an excerpt tweeted by ITV.

She added that "it's a very real thing to be going through behind the scenes."

When asked by journalist Tom Bradby if things have "really been a struggle," the duchess replied: "Yes." 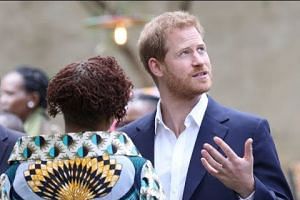 Bradby followed the royal couple on their tour of Africa with their son Archie.

The documentary, "Harry & Meghan: An African Journey," airs in the United Kingdom this weekend. The documentary will also show Prince Harry's emotional side as he reveals that losing his mother, Princess Diana, is still "a wound that festers."

Prince Harry has long fought to protect Meghan from the abuse experienced by his late mother, who was hounded by paparazzi right up until she was killed in a car crash in Paris in 1997.

In a recent statement, he said: "I lost my mother and now I watch my wife falling victim to the same powerful forces."

Earlier this month, Meghan filed suit against the tabloid Mail on Sunday for "unlawfully" publishing a private letter. Harry said the decision to launch legal action came after a "ruthless campaign" waged by the press, which he described as "bullying."

In November 2016, when the couple were newly dating, Kensington Palace released a rare statement regarding the behavior of the press, condemning its reporting and saying that Markle had been subjected to "a wave of abuse and harassment."

"This is not a game - it is her life and his," the palace's fierce rebuke read, adding that the Prince was worried for his then-girlfriend's safety.