OSLO (REUTERS) - Icy Arctic islands north of Norway are warming faster than almost anywhere on Earth and more avalanches, rain and mud may cause "devastating" changes by 2100, a Norwegian report said on Monday (Feb 4).

The thaw on the remote Svalbard islands, home to 2,300 people and where the main village of Longyearbyen is 1,300km from the North Pole, highlights risks in other parts of the Arctic from Alaska to Siberia.

Average temperatures on Svalbard have leapt between three and five degrees Celsius since the early 1970s and could rise by a total of 10 deg C by 2100 if world greenhouse gas emissions keep climbing, the study said.

Almost 200 governments promised in the 2015 Paris climate agreement to limit a rise in average global temperatures to"well below" 2 deg C above pre-industrial times by 2100.

Worldwide, temperatures are up about 1 deg C.

On Svalbard, the envisaged rise in temperatures would thaw the frozen ground underpinning many buildings, roads and airports, cause more avalanches, "slushflows" and landslides, melt glaciers and threaten wildlife such as polar bears and seals that rely on sea ice to hunt.

"A 10 degree warming, with the implications for Arctic nature, ice-dependent species, will be devastating," Climate and Environment Minister Ola Elvestuen told Reuters. 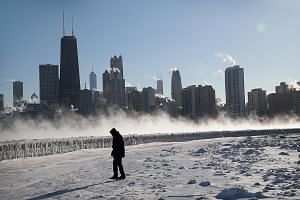 Living in an age of extreme weather

Arctic happenings of interest to us: Sam Tan

Norway will have to increase investment to relocate buildings from avalanche paths and drill deeper infrastructure foundations as permafrost thaws, the report said.

Two people died in 2015 when an avalanche destroyed 10 houses in Longyearbyen.

Many other parts of the Arctic, especially its islands, are also warming far quicker than the world average as the retreat of snow and sea ice exposes darker water and ground that soaks up ever more of the sun's heat.

Temperatures on Svalbard would stay around current levels only if governments make unprecedented cuts in global emissions, the report said.

"No one is doing enough" to limit greenhouse gas emissions, Elvestuen said of government actions. "We have to do more ... The use of oil and gas has to go down."

Inger Hanssen-Bauer, head of the Norwegian Centre for Climate Services, which produced the report, said the findings were a warning for the rest of the Arctic.

"The main message is that these changes are happening so fast," she told Reuters.

Ketil Isaksen, a lead author at the Norwegian Meteorological Institute, urged researchers to pay more attention to landslides as the permafrost melts.

"There is now a lot of focus on snow avalanches, but landslides in summer should be taken more into account," he said.