SANDVIKA (Norway) • A gun attack at a Norwegian mosque on Saturday will be investigated as a possible act of terrorism, police said yesterday.

"We're investigating this as an attempt at carrying out an act of terrorism," he said.

The suspect had been apprehended after the attack, in which shots were fired but no one was hit, with one of the people inside the mosque having overpowered him before police arrived.

Only three people were present in the mosque at the time of the attack. Mr Mohammad Rafiq, a 65-year-old retired Pakistani Air Force officer, was the first of the three to approach the suspect, a mosque spokesman said.

"I suddenly heard shooting from outside," Mr Mohammad told Reuters via an interpreter, adding that a man then entered the building with guns and pistols. "He started to fire towards the two other men," Mr Mohammad said, adding that he had then grabbed the suspect, held him down and snatched the weapons from him.

Mr Mohammad, who has lived in Norway for the past 21/2 years, said he was still recovering from the attack, having suffered a red eye and a swollen hand. 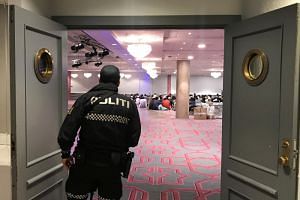 Norway police step up presence at mosques after shooting incident

The alleged attacker, who has not been named, was also suspected of killing his stepsister, a young woman who was found dead at his home, police said earlier.

The mosque had implemented extra security measures this year after the massacre of more than 50 people at two New Zealand mosques by a suspected right-wing extremist.

"We are trying to combat this, but it's a challenge. I think it's a worldwide challenge in a sense," Ms Solberg said.

In 2011, anti-Muslim neo-Nazi Anders Behring Breivik massacred 77 people at a youth camp in Norway's worst peacetime atrocity, the majority of them teenagers.

The Assemblies of God of Singapore, a group of 45 churches, has condemned the shooting.

Its general superintendent, Reverend Dominic Yeo, said: "This act of violence signifies a complete disregard for sacred places and the sanctity of life. A barbaric act committed on the eve of a sacred day demonstrates immense cruelty and heartlessness.

"In such tumultuous times... through our unity and shared humanity, we can come together to be stronger than those who seek to divide us."