BERLIN (DPA) - There will be no uniform speed limit on Germany's Autobahns, the government assured nervous drivers on Monday (Jan 28).

"There are more intelligent ways to direct traffic than with a uniform speed limit," said government spokesperson Steffen Seibert as he tried to tamp down a kerfuffle started when Environment Minister Svenja Schulze refused to be nailed down on the topic during a Sunday night talk show.

During the show, Ms Schulze had cited both leaked news that a working group was pondering a 130kmh speed limit on federal highways and comments by Transportation Minister Andreas Scheuer saying he opposed the limit.

However, Ms Schulze had never stated what her personal beliefs were on the matter, nor did she state a policy preference in her role as a minister.

Because she refused to take a side, she came under criticism from both sides of the debate on Monday. That prompted her to clarify her stance on Facebook.

"I'm open to a speed limit, like we already have all over the place," she wrote. "I'm simply against the federal government taking a stance on individual positions currently being discussed by the transportation committee (the working group)."

The working group's recommendations are not expected until March. Its focus is on whether traffic rules can have an impact on climate change.

Ms Schulze is a member of the Social Democrats, a party that did endorse a 130kmh speed limit back in 2007. 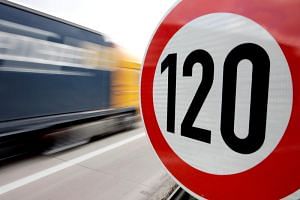 Not so fast: Most Germans favour speed limits on the autobahn to help fight climate change

Mr Seibert also said no action would be taken before the working group presented its recommendations. He noted that the current government's coalition agreement makes no reference to implementing a speed limit.

Germany's highways are famed for lacking a speed limit, though there are plenty of stretches where limits are set.

Those are balanced out by long stretches where drivers can move as fast as their Audis, BMWs or Porsches can carry them.

In a recent survey, 51 per cent of Germans said they would support a 130kmh speed limit, while 47 per cent said they were against any kind of speed limit.