The 435km march from Sunderland to the capital's parliament will conclude on March 29 - the date Britain was scheduled to pull out of the European Union after nearly half a century.

But lawmakers' refusal to back the divorce deal Prime Minister Theresa May struck with Brussels has put Britain's divorce from the EU in some doubt.

May will try this week to push her pact through the divided House of Commons for a third time.

If it is approved, the prime minister will ask the remaining 27 EU leaders to sign off on a Brexit deadline extension through June to allow parliament to pass the necessary legislation.

Another rejection of the deal and May will be forced to seek a longer delay that some EU leaders have said could last through the end of next year.

"Sunderland is very symbolic. It was the Sunderland result on the night of the (2016 Brexit) referendum that made us think - wow, this is going to happen," Farage said before setting off on the march in a brand new pair of sneakers and trench coat.

Farage was a poster child of the pro-Brexit effort whose calls for barriers to migrants and sovereignty from EU rules struck a cord in working-class cities such as Sunderland. 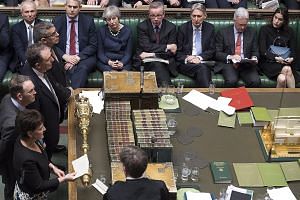 He resigned as leader of the populist UK Independence Party (UKIP) after the 2016 vote and now heads a new Brexit Party in the European Parliament.

"The country is actually united around 'Let's get on with this'," he told AFP.

Some Britons who voted to stay in Europe hope an extension will give London a chance to negotiate much closer ties than those in May's current deal.

Others will try to use the time to force another Brexit referendum that could overturn the first one's result.

Such talk is anathema to Farage and his supporters.

"We are a little forgotten by the politicians," retired banker Christopher Treggelis said.

"My democratic vote has been ignored," pensioner Steve Coward added as the group set off along their North Sea route for the town of Hartlepool some 30km to the south.

Organisers are providing meals and accommodations to "core marchers" for a one-off payment of £50 (S$90).

"I'm taking to my second right, which is to protest peacefully about the parliament ignoring my democratic vote," said Coward.

Some said that any economic pain caused by the breakup would be short-lived and worth the benefits of greater independence.

Sunderland store owner Janice McBeth said she was sure "this country will thrive" down the line.

"I'm not naive - it might be difficult, a few shortages, trade barriers," she said. "But it will be sorted out."

The march is designed to echo similar processions witnessed in England's northeastern coalfields in the 1930s that saw workers protest poverty and the closure of a big shipyard.

The Jarrow March of 1936 was the most famous. A few hundred reached London and were treated as heros once they returned home.

Sunderland has been shaken in the past month by news that Nissan is ending production of its luxury Infinity models - a reversing a decision to build a new sports utility vehicle - at the local plant.

Farage admitted that he intends to cover just a third of the trek to London.

"Unfortunately, I have a European summit to go to, one or two things like that," he told the BBC.