ASTANA, KAZAKHSTAN (AFP) - The head of Kazakhstan's senate was sworn in as interim president in a pomp-filled ceremony on Wednesday (March 20), and immediately proposed renaming the country's capital after his predecessor.

Mr Nursultan Nazarbayev, the only leader an independent Kazakhstan has ever known, shocked the nation on Tuesday with his resignation after nearly three decades in power.

Senate chairman Kassym-Jomart Tokayev, 65, was Kazakhstan's second-in-command and is set to serve as president until fresh elections in April next year.

But Mr Nazarbayev, 78, will retain significant influence thanks to his constitutional status as "Leader of the Nation" and lifelong position as chief of the country's security council.

In his first announcement after his swearing in before the Upper and Lower Houses of Parliament, Mr Tokayev said the capital, Astana, should be renamed after Mr Nazarbayev.

In the broadcast ceremony, Mr Tokayev told deputies that Mr Nazarbayev had "demonstrated wisdom" in deciding to resign. 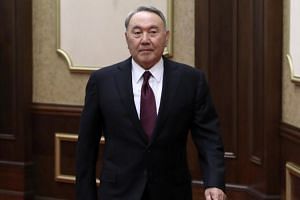 "The results of independent Kazakhstan are there for all to see," Mr Tokayev added.

"I propose... naming the country's capital, Astana, in honour of the first president," Mr Tokayev said, suggesting the new name be "Nursultan".

"The opinion of (Mr Nazarbayev) will be of special, one can say priority, importance in the development and adoption of strategic decisions," the new leader added.

Mr Nazarbayev, also present, was applauded for several minutes by assembled lawmakers as he took a seat at the head of the session.

Astana replaced Almaty as the capital in 1997 and boomed from a minor provincial steppe town into a futuristic city.

The name literally means "capital" in Kazakh and there has long been speculation it could at some point be renamed after the leader who shaped it.

Mr Nazarbayev's decades at the helm transformed Kazakhstan into an energy powerhouse, but he governed with little tolerance for opposition.

On Tuesday, he surprised Kazakhs with a televised address, saying he had made the "difficult decision" to resign.

Mr Tokayev has a strong diplomatic track record dating back to the Soviet period, serving twice as Kazakhstan's foreign minister.