The world's only climate treaty pledges to cap global warming at "well under" 2 deg Celsius and prevent manmade CO2 from leeching into the atmosphere by century's end.

But it left a mountain of critical rules and procedures to be worked out.

"This may sound like a technical exercise, but it matters," Todd Stern, a senior fellow at the Brookings Institution in Washington DC and the top climate diplomat under Barack Obama, said in a recent speech. "Guidelines have a lot to do with how strong the regime becomes."

The deadline for completing this "rule book" is the November climate summit in Katowice, Poland. The agreement itself goes live in 2020.

Negotiators have had more than two years to hammer out the fine print but - as per usual - have procrastinated.

"It's no secret that things have not been going swimmingly so far," said Alden Meyer, director of strategy and policy for the Union of Concerned Scientists, a Washington-based advocacy and research group. 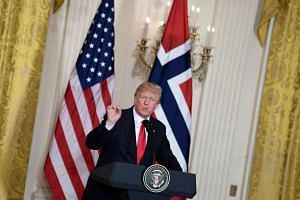 How quickly the world weans itself from fossil fuels, improves energy efficiency, and learns how to suck CO2 out of the air will determine whether climate change remains manageable or unleashes a maelstrom of human misery.

The window of opportunity for holding the rise in temperature at 2 deg C - much less the 1.5 deg C ceiling the Paris pact vows to consider - has grown perilously narrow.

A single degree Celsius of warming so far has already accelerated species extinctions, deadly droughts and flooding, and superstorms engorged by rising seas.

"Gradualism won't get the job done," said Stern. "We can't produce the results those scenarios call for without full-on commitment."

But trend lines are moving the wrong way: after remaining flat for three years, global CO2 emissions in 2017 went up by 1.4 per cent, dashing hopes that they had peaked.

US President Donald Trump's decision to pull out of Paris pact - along with US efforts to boost fossil fuel technologies - have not helped, even as China, France, Germany and Canada have stepped in to fill the breach in climate leadership.

Voluntary national pledges made under the treaty to cut carbon pollution, if fulfilled, would yield no better than a 3 deg C world. Once-every-five-year reviews of these commitments don't kick in until 2023.

Negotiators know this is too late.

"The scale and pace of climate action must increase dramatically, and immediately so," reads a UN summary of written submissions to the Fiji-inspired Talanoa Dialogue, designed to inspire more ambitious CO2-slashing pledges.

Still, negotiations have bogged down.

Under pressure, the rift between rich and developing countries that stymied climate talks for more than two decades before the 2015 accord put all nations on the same page has reemerged.

For the rulebook, "transparency" has emerged as a hot-button issue.

Rich nations, for example, favour a standardised yardstick for the measurement, reporting and verification of carbon-cutting pledges, with limited exceptions for the poorest countries.

Developing nations have pushed back, calling for greater "flexibility".

"This is an old debate," said Meyer. "Developed countries are concerned that some developing ones are trying to take us back to the past."

When it comes, however, to the rich-nation promise of US$100 billion (S$132.5 billion) per year in climate finance from 2020, the issue cuts the other way.

"It has been frustrating to hear some developed countries celebrate their climate leadership even as they fall well short of the modest commitments they have made," said Thoriq Ibrahim, environment minister for the Maldives and chairman of the Alliance of Small Island States.

A key complaint by recipient nations is that rich ones have failed to map how and when money promised will be delivered.

Working out a coherent "user's manual" for the Paris agreement is also crucial for the signals it sends to the private sector, which must take the lead in the shift to a low-carbon global economy, Canadian environment minister Catherine McKenna told AFP.

"The markets need to see that governments are committed on climate action," she said in Paris last week following a meeting with her French counterpart Nicolas Hulot.