BRUSSELS (AFP) - A plan for Nato to take a bigger role in Iraq could satisfy President Donald Trump's call for more alliance action in the Middle East, a US official said on Tuesday (Feb 11).

Nato defence ministers will meet in Brussels this week to discuss a proposal to transfer personnel from a US-led coalition fighting the so-called Islamic State in Iraq and Syria (ISIS) group to Nato's training mission in Iraq.

"It's part of burden-sharing - our European allies coming in with us and doing more in counterterrorism," she told reporters.

"The Nato operation is already ongoing in Iraq and I think it will definitely be an answer to what President Trump has requested."

Mr Trump called on Nato to do more in the Middle East in January, days after a US drone strike against a top Iranian commander in Baghdad sparked a regional crisis.

The Jan 3 strike that killed Iranian General Qassem Soleimani sparked outrage in Baghdad and a vote by the Iraqi Parliament to oust all foreign troops - including 5,200 US soldiers.

The anti-IS coalition halted its campaign for three weeks in response, and Nato stopped training activities while insisting it remained committed to helping Iraq.

In recent weeks, Nato officials from Secretary General Jens Stoltenberg down have been engaged in frantic diplomacy with Washington and Baghdad to seek a way out of the crisis. 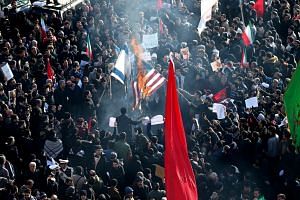 They want to protect gains made against ISIS, which at its peak controlled large areas of Iraqi territory.

A plan to transfer some coalition forces - who number some 11,000 across Iraq, Syria and Kuwait - to Nato's structures has already won support in Baghdad, according to diplomatic sources.

There had been hopes that officials could thrash out a concrete proposal for ministers to formally approve in Brussels this week, but political turmoil in Iraq has slowed the process.

One Nato official said that, for now, discussions were focusing on "functions not figures" - what the transferred troops would do rather than how many of them would move.

The Nato mission, currently 500 strong and led by a Canadian, is seen as more palatable to the Iraqi authorities because of its non-combat role and because it is not under US command.

Mr Stoltenberg said no decisions had been made but said the Nato mission would continue to focus on training Iraqi forces and would not take on combat operations, insisting "prevention is better than intervention".