BRUSSELS (AFP) - Nato allies will hold an "extraordinary" meeting on Tuesday (Nov 24) at Ankara's request to discuss Turkey's shooting down of a Russian fighter jet along the Syrian border, an alliance official said.

"At the request of Turkey, the North Atlantic Council will hold an extraordinary meeting at 1600 GMT (12am Singapore time). The aim of this extraordinary NAC is for Turkey to inform Allies about the downing of a Russian airplane," the official told AFP.

The North Atlantic Council consists of ambassadors from the 28 Nato member states.

Ankara said two of its F16 fighters shot down a Russian Su-24 after it violated Turkish airspace 10 times within a five-minute period along the Syrian border.

Earlier a Nato official said the alliance was in "close contact" with Ankara and watching developments. 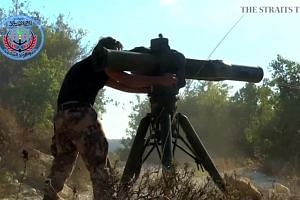 "Nato is monitoring the situation closely. We are in contact with Turkish authorities," the official told AFP in an email.

On that occasion, Nato condemned the Russian incursions and warned of "the extreme danger of such irresponsible behaviour."

All 28 Nato members pledge a one-for-all, all-for-one response to any military threat if a member invokes what is known as Article Five when it comes under attack.

The only time this has been invoked was by the United States after the Sept 11, 2001 attacks on New York and Washington.