PARIS • French "yellow vest" demonstrators began their 19th consecutive weekend of protests against President Emmanuel Macron's government yesterday as military units were deployed to help the police clamp down on any trouble.

Protesters were banned from gathering on the Champs Elysees in Paris after shops and businesses along the avenue were looted and wrecked last weekend, which prompted the government to call in "Operation Sentinelle" army units for this weekend.

Demonstrators began marching in the capital yesterday along a new route taking them from Denfert Rochereau in southern Paris with the aim of finishing by Barbes, near the Sacre Coeur church in northern Paris.

Thousands of police and troops fanned out across central Paris and other French cities ahead of the planned protests, with the government vowing to prevent a repeat of last weekend's lawlessness.

Soldiers from the Sentinelle anti-terror force were being used to guard public buildings, freeing up 6,000 police personnel in Paris to tackle any flare-ups of violence. The move has drawn fierce criticism from opposition parties, who have accused the government of playing with fire.

Dozens of police vehicles, including armoured trucks and water cannons, encircled the Arc de Triomphe at the top of the iconic avenue, with officers searching people's bags and patrolling in front of boarded-up storefronts. At the opposite end of the avenue, access was completely blocked to the Place de la Concorde, near the presidential palace and the National Assembly, and two drones were flying over the capital to help officers track protesters' movements. 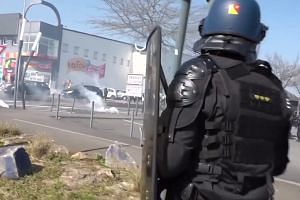 Yellow vest organisers had called on social media for protests elsewhere in Paris, including the Trocadero square in front of the Eiffel Tower and the Place de la Republique, though both areas were calm early yesterday.

But banks and other businesses remained shut in several parts of the city, their windows protected with planks of wood, and some schools had cancelled Saturday classes in anticipation of further violence.

Protest bans were also in effect in the centres of Toulouse, Bordeaux, Dijon, Rennes and the southern city of Nice, where Chinese President Xi Jinping was to meet Mr Macron this weekend.

Named after the high-visibility vests French drivers have to keep in their cars and worn by protesters, the "yellow vest" movement has morphed into a broader backlash against Mr Macron's government.

In recent weeks, the protesters' numbers have dwindled, falling from 282,000 nationwide on the first Saturday to just 32,000 last week, according to official estimates.