BERLIN • Chancellor Angela Merkel yesterday authorised a Turkish demand for a German TV comedian to be prosecuted over a crude satirical poem about President Recep Tayyip Erdogan in a bitter row over free speech.

Turkish Deputy Prime Minister Numan Kurtulmus on Monday said German comedian Jan Boehmermann had committed a "heavy crime against humanity" by insulting the Turkish head of state. "No one has the right to insult" Mr Erdogan, Mr Kurtulmus told reporters.

"The government will give its authorisation in the case at hand," Dr Merkel told reporters, adding that it was up to the courts to decide on his guilt or innocence. 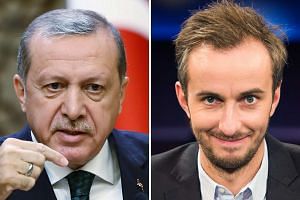 The request from Ankara had put her in a tricky position because she has spearheaded the effort to secure a deal between the European Union and Turkey that is helping to reduce the number of migrants arriving in Europe and Germany.

Critics have accused her of getting too cosy with Turkey and the decision yesterday to pass the case to a prosecutor could fuel more accusations that she is compromising on values like the freedom of expression to secure Turkey's continued cooperation on the refugees. Under a section of Germany's criminal code, the government needed to authorise prosecutors to pursue a case against Boehmermann, who may have broken a German law by insulting a foreign leader.

On March 31, the satirist recited a poem on public broadcaster ZDF that mocked Mr Erdogan with crude references to bestiality.

"There were different opinions between the coalition partners - the conservatives and the SPD (Social Democrats)," Dr Merkel told reporters at the Chancellery in Berlin.

Mr Thomas Oppermann, a senior SPD member, criticised the government's decision, writing on Twitter: "Prosecution of satire due to 'lese majeste' does not fit with modern democracy."

In a reflection of the difficult position the case had put Berlin in, Dr Merkel said the German government planned to remove the section of the Criminal Code that requires it to grant permission for prosecution in such cases.

Boehmermann has been accused of breaking the rarely enforced Section 103 of the Criminal Code - insulting organs or representatives of foreign states.

Dr Merkel said the government would present a draft law to remove the paragraph, which should be passed in the current legislative period and come into force from 2018.

She justified the decision by pointing to the close and friendly relationship that Germany shares with Turkey, referring to the three million people with Turkish roots who live in Germany, their economic ties and cooperation as members of the North Atlantic Treaty Organisation.

Dr Merkel also took the opportunity to press Turkey to uphold the values of freedom of expression, the press and art.