LONDON • Mrs Theresa May had a mission to fight Britain's "burning injustices" through strong and stable leadership. However, her legacy as prime minister will be anything but.

The Conservative premier's turbulent time in office was swamped and ultimately sunk by her legacy-defining battle to secure a Brexit divorce deal.

It eroded her authority and led her to step down as leader, handing over the keys to Downing Street to Mr Boris Johnson yesterday after a month-long contest to replace her.

Mrs May won praise for her determination and ability to survive a rolling three-year political crisis since the referendum vote to leave the European Union.

But her approach to the Brexit endgame, refusing to accept MPs' trenchant opposition to her deal before belatedly opening ultimately futile negotiations with the opposition Labour Party, left Mrs May politically adrift.

In a forlorn bid in March to appease the most ardent eurosceptic MPs in her party, Mrs May, 62, offered to resign if they were to approve her deal. But several dozen rebelled anyway, consigning it to a third defeat in Parliament.

She was forced by her party to agree to set out a timetable for her departure, but asked for time to give lawmakers a fourth chance to vote on the agreement in early June. However, her own MPs' patience ran out and she was forced in May to name the date of her departure, triggering the fevered leadership race to replace her.

The daughter of a Church of England vicar, Mrs May was born on Oct 1, 1956, in Eastbourne - a seaside town in southern England where her father was a chaplain at the local hospital.

She has described herself in interviews as a "goody two shoes" whose Protestant faith defined her upbringing. Mrs May studied geography and met her husband Philip at Oxford University before joining the Bank of England. 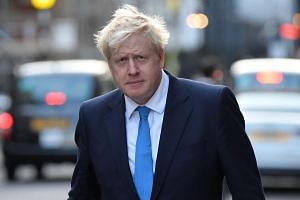 The two do not have children, and Mrs May devoted herself to a life of public service that saw her become Conservative Party chairman in 2002.

She became prime minister in the aftermath of the 2016 Brexit referendum, which swept away her predecessor David Cameron.

She took office pledging to fight the "burning injustices" in the country, but made little headway amid the Brexit drama. Despite having made a cautious case to stay in the EU, Mrs May embraced the cause with the mantra "Brexit means Brexit".

The splits in her Conservative Party became a serious problem after a disastrous snap election in June 2017, when she lost her parliamentary majority.

"She has failed," said Dr Simon Usherwood, from the University of Surrey's politics department. "There's very little to commend her. She doesn't really have a legacy."