British Prime Minister Theresa May has asked the European Union for an extension to the Brexit deadline of just three months in a surprise move that increases the risks of a no-deal exit in the next few months.

The EU says she can have a short extension, but only if Mrs May's twice-rejected divorce deal gets through the British Parliament next week. The pressure is back on for the Prime Minister to get Parliament to approve her deal.

Here is a look at what happened and what is next.

Mrs May had earlier said that if Parliament passed her deal, she would ask for a short extension of up to June 30 to give the government time to work on Brexit legislation and get it passed in Parliament.

But if MPs did not support her deal, she would ask for a longer extension, beyond June 30 and possibly up to 21 months, so that Britain can work on alternative arrangements.

Under pressure from hard Brexiters in her Cabinet who are against a long extension because they think it would betray Brexit voters, Mrs May has now changed her position. She told MPs in Parliament yesterday that she was not prepared to delay Brexit beyond June 30. In her note to European Council president Donald Tusk, she also made no mention of a longer extension. 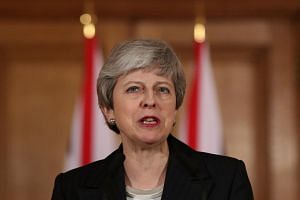 Macron cranks up pressure on British PM over Brexit deal

Mrs May's new position has increased the risks of a no-deal Brexit: If Parliament does not pass her deal, there would not be enough time between March 29 and June 30 for Britain to come up with an alternative.

Cabinet Office Minister David Lidington said yesterday that agreeing to a short delay to Brexit without an agreement would increase the risk of leaving the EU without a deal.

"In the absence of a deal, seeking such a short and critically one-off extension would be downright reckless," he told Parliament.

Businesses dislike uncertainty and the prospect of a no-deal Brexit will impact banking and customs operations and the supply of food and medicine from EU countries.

If Britain fails to ratify the deal in time, and with the legal exit date of March 29 approaching fast, Mr Tusk could call an emergency summit for late next week.

At stake would then be a no-deal Brexit or a much longer extension to give the British Parliament time to find a notional consensus approach.

But given that Mrs May has said that she was not prepared to delay Brexit any further than June 30, questions have been raised over whether she will resign if her request for a three-month delay is refused by the EU.

A version of this article appeared in the print edition of The Straits Times on March 22, 2019, with the headline 'May's about-face and what's next'. Subscribe
Topics:
More
Whatsapp Linkedin FB Messenger Telegram Reddit WeChat Pinterest Print Purchase Article Copy permalink