Seizing a ship going about its legitimate business unacceptable and escalatory, says spokesman

LONDON • Prime Minister Theresa May held a meeting of Britain's Emergencies Committee yesterday to discuss Iran's seizure of a British-flagged oil tanker in the Gulf.

In one of her final important acts as Prime Minister before resigning tomorrow, Mrs May chaired a meeting of Britain's Cabinet Office Briefing Rooms (COBR) Emergencies Committee at about 10.30am local time (5.30pm Singapore time), her Downing Street office said.

"We do not seek confrontation with Iran, but it is unacceptable and highly escalatory to seize a ship going about (its) legitimate business through internationally recognised shipping lanes," Mrs May's spokesman told reporters in London. "The ship was seized under false and illegal pretences, and the Iranians should release it and its crew immediately."

It was Britain's third Emergencies Committee meeting since Iran seized the Stena Impero tanker last Friday, in what London told the United Nations Security Council was an illegal move conducted in Omani waters. The meeting was the first Mrs May chaired on the seizure.

COBR meetings typically bring together ministers, security, intelligence and military chiefs in a secure facility in central London. Britain has a navy frigate, the HMS Montrose, in the Gulf, and has requested all British-flagged ships to avoid the Strait of Hormuz choke point until further notice.

The seizure of a British-flagged tanker by Iran was in "clear violation of international law" because it was in Omani waters, the head of the UK Chamber of Shipping had said on Sunday.

On Saturday, British Foreign Secretary Jeremy Hunt said the Stena Impero was seized in Omani waters in clear contravention of international law and then forced to sail into Iran. Iran says the tanker was captured after it collided with a fishing boat. 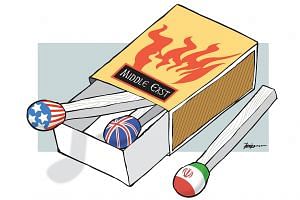 The looming confrontation with Iran

"The chart released by Her Majesty's government today clearly demonstrates that the Swedish-owned and British-flagged tanker, Stena Impero, was in Oman territorial waters when she was boarded by the Iranian Revolutionary Guards on Friday, 19th July," said Mr Bob Sanguinetti, chief executive officer of the UK Chamber of Shipping.

"The evidence provided is proof that the seizing of the Stena Impero was in clear violation of international law." Mr Sanguinetti added that there was no comparison to be made with the seizure of the Grace I tanker by British forces, which was done under international law for the breach of European Union sanctions. "The Stena Impero was outside Iranian waters and legitimately carrying out its business at the time of its seizure."

In a letter to the UN Security Council, Britain said that Iran had claimed that the Swedish-owned Stena Impero had tried to enter the strait through the exit route, while not responding to messages or warnings and with its transponder switched off. "This is not the case," the letter said.

Iranian officials have also claimed that the tanker was detained due to a collision with an Iranian fishing boat, the letter said, adding: "There is no evidence of this.

"Even if it had occurred, the ship's location within Omani territorial waters means that Iran would not have been permitted to intercept the Stena Impero."

Asked if Britain could introduce new sanctions or freeze Iranian assets, Finance Minister Philip Hammond told BBC television: "We have already got a wide raft of sanctions against Iran, particularly financial sanctions, so it is not clear that there are immediate things we can do, but we are of course looking at all the options."

Mr Hunt spoke on Sunday to his French and German counterparts over Iran's seizure of a British-flagged tanker in the Gulf, his office said. "Both ministers agreed with the Foreign Secretary that safe passage for vessels through the Strait of Hormuz is a top priority for European nations, while avoiding any possible escalation," it said in a statement.

Britain plans to take further measures this week, Mr Hunt said in another statement, without giving details. He was due to take questions in the House of Commons yesterday.

Either Mr Hunt or former London mayor Boris Johnson will be confirmed as the new leader of the governing Conservative Party today and take over from Mrs May as prime minister tomorrow.